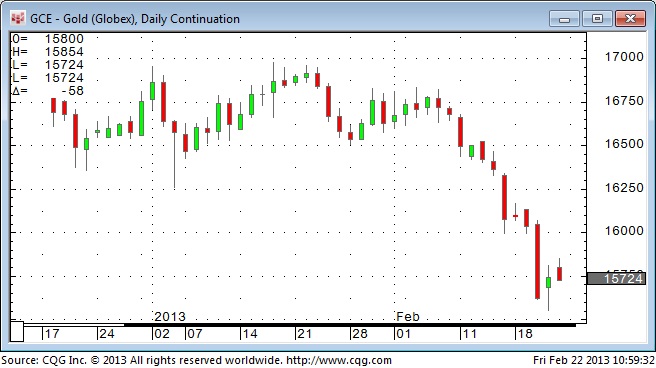 The stock market has been rising steadily since the Japanese inspired Key Turn Date of November 16…but doing so with a growing sense that a correction, at least, was due. We may have had another KTD this week (it’s too early to tell) when a number of markets reversed course on Wednesday triggered by the release of the Fed minutes.

Gold: dropped nearly $120 in 2 weeks, Silver was down $3. Base metals were down sharply this week. Precious Metals may have made a short term low this week. I covered a short gold position I have held for over a year. Stocks: all major US stock indices moved higher early this week then reversed on Wednesday/Thursday. As of mid-morning Friday all indices look to have made Key Weekly Reversals. Currency: The US$ rallied Vs. all major currencies (save the Yen) on the Fed minutes. The 18% drop in the Yen Vs. the USD since mid-November appears to have stalled. PM Abe is meeting Obama and is expected to announce the new head of BOJ next week. The Yen could move on the announcement. Last week I established option positions looking for an end to Yen weakness as well as a drop in Yen option VOL. Interest rates: Bonds rallied to their best levels in a month following the release of the Fed minutes…even though a change in Fed policy would likely see the Fed buying fewer bonds. I’ve asked a number of times, “What are we trading?” and my best answer has been, “Central Bank policies.” David Rosenberg notes the correlation between the S+P and the Fed balance sheet is 85%. Currency markets have been responding to relative central bank policies with talk of currency wars all over the media….so…the hint of a slight change in Fed policy within the minutes released Wednesday was significant.

Market Psychology has been increasingly “What Me?….Worry?” kind of bullishness since mid-November. Witness the 5 year plus lows in VIX, new all-time highs in the mid-cap Russell 2000, the NZD trading at an 8 year high Vs. CAD. It seems as though market relationships had left “risk on / risk off” behind and were reacting to individual market fundamentals…then suddenly, on Wednesday, correlations went to ONE in a “risk off” mode with the USD and Yen higher, all other currencies lower, stocks and commodities down and bonds up. If we did indeed have a Key Turn Date then Market Psychology may return to a binary “risk on / risk off” world.

Futures markets provide an efficient and effective way to trade a wide range of financial markets. If you would like to speak to a broker to discuss the aforementioned markets or about trading in the futures market please call 604-664-2842.