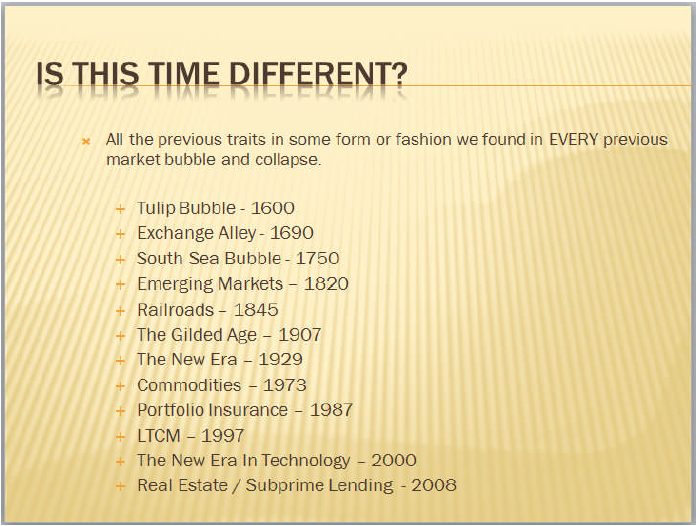 As the markets are propelled higher by the successive interventions of the Federal Reserve it is hard not to think that the current rise will continue indefinitely. The most common belief is currently that even if the Fed begins to “taper” their purchases the resurgence of economic growth will continue to propel stocks higher even in the face of higher interest rates. The financial world has finally achieved a “utopian” state where there is no longer investment risk in any asset class -because if it stumbles the central banks of the world will be there to catch them.

However, a quick look at history tells us that this time is not really different. In March of 2008 I was giving a seminar discussing why we had already likely entered into a recession and that a market swoon of mass proportions was approaching. While the advice fell on deaf ears as we were in a “Goldilocks” economy, and “subprime” was contained, the bubble ended just a few short months later as it was no “different” then versus any other time in history, or, even now.

The slide below was from the presentation: Of course, the next time I make this presentation I will have to add “Central Bank Interventions” to the list.
The reality is that markets cycle from peaks to troughs as excesses built up during the up cycle are liquidated. The chart below shows the secular cycles of the market going back to 1871 adjusted for inflation.
This time is not different. The excesses being built up in the markets today will eventually be reverted just as they have been at every other peak in market history.

Lance Roberts, the host of “StreetTalkLive”, has a unique ability to bring the complex world of economics, investing and personal financial wealth building to you in simple, easy and informative ways but also makes it entertaining to listen to at the same time. Lance brings fundamental, technical and economic perspectives, combined with a unique focus, to the day’s news helping listeners understand how it impacts their money.

After having been in the investing world for more than 25 years from private banking and investment management to private and venture capital; Lance has pretty much “been there and done that” at one point or another. His common sense approach has appealed to audiences for over a decade and continues to grow each and every week.

Making money is not hard. Learning how to keep it has been the trick. Lance’s teachings are fairly basic. Conservation of principal, a disciplined approach and living on less than you make and carrying little or no debt is the only way to build wealth. His advice is more of the “chicken soup” variety as there is no magic “black box” to build wealth – just time, hard work and sacrifice.

Lance is also the Chief Editor of the X-Report, a weekly subscriber based-newsletter that is distributed nationwide. The newsletter covers economic, political and market topics as they relate to the management portfolios. A daily financial blog, audio and video’s also keep members informed of the day’s events and how it impacts your money.

Lance’s investment strategies and knowledge have been featured on Fox 26, CNBC, Fox Business News and Fox News. He has been quoted by a litany of publications from the Wall Street Journal, Reuters, The Washington Post all the way to TheStreet.com as well as on several of the nation’s biggest financial blogs such as the Pragmatic Capitalist, Zero Hedge and Seeking Alpha.

After all it is “All About You And Your Money”