This One Chart Shows Exactly How Undervalued Gold is Right Now…

Posted by The Sovereign Man 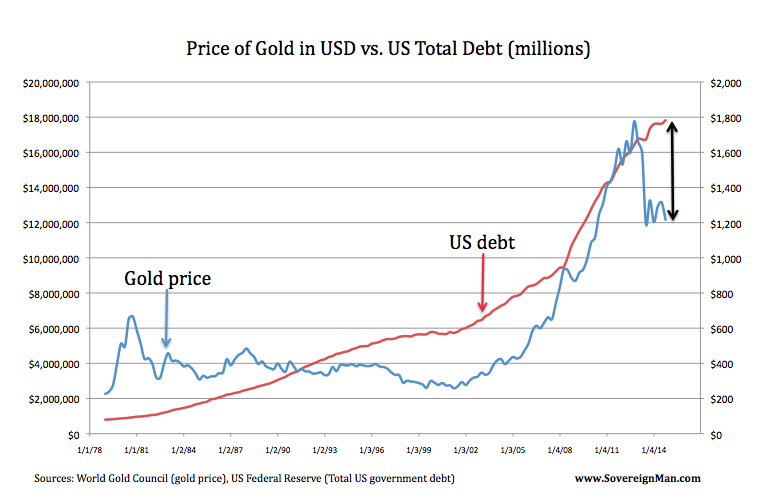 For the benefit of anyone living under a rock these past weeks, Bill Gross, the so-called “Bond King” and manager of the world’s largest bond fund (PIMCO), jumped ship before he could be shoved overboard.

PIMCO’s owners, Allianz, must surely regret having allowed so much power to be centralized in the form of one single ‘star’ manager.

In a messy transfer in which nobody came out of well, Janus Capital announced that Bill Gross would be joining to run a start- up bond fund, before he had even announced his resignation from PIMCO (but then again Janus was a two-faced god).

This was deliriously tacky behavior from within a normally staid backwater of the financial markets.

Some financial media reported this as a ‘David vs Goliath’ story; in reality it is anything but.

This writer recalls the giddy marketing of a particularly new economy-oriented growth vehicle called the ‘Janus Twenty’ fund in the UK back in 2000.

Between March 2000 and September 2001, that particular growth vehicle lost 63% of its value. Faddish opportunism is clearly still alive and well.

We discussed this last week, highlighting this seeming anomaly that even as there has never been so much debt in the history of the world, it has also never been so expensive.

This puts the integrity of markets clearly at risk. And we have long sought alternatives that offer much lower credit and counterparty risk.

The time-honored alternative has been gold.

In fact, as the chart below shows, gold has tracked the expansion in US debt pretty handily (editor’s note: the correlation between the two is a strong +0.86). You can see in 2011, the rise in the gold price became overextended relative to the rise in US debt. Then it decoupled and went in the opposite direction.

This is a similar trend to what occurred in the early 1980s. And if one expects that relationship to resume (we do), then gold looks anomalously cheap relative to the rising level of US debt.

A second rationale for holding gold takes into account the balance sheet expansion of central banks: A third rationale for owning gold is best summed in perhaps the most damning statement to capture our modern financial tragedy.

“We all know what to do, we just don’t know how to get re-elected after we’ve done it.”

This is from Jean-Claude Juncker, former Prime Minister of Luxembourg and current President-Elect of the European Commission.

It’s clear there is a vacuum where bold political action should reside. Elected leaders continue to kick the can down the road and ignore dangers to the system.

And in this vacuum, central bankers have stepped in to fill the void via bond yields that are below the rate of inflation.

They say that to a man with a hammer, everything looks like a nail.

To a central banker facing the prospect of outright deflation, the answer to everything is the printing of ex nihilo money and the manipulation of financial asset prices.

This makes it incredibly difficult to shake off the suspicion that navigating the bond markets over the coming months will require almost supernatural powers in second-guessing both central banks and one’s peers.

For what it’s worth this is a game we won’t even bother playing.

Our pursuit of the rational alternative – proper forms of money and compelling deep value in equity markets – continues. More to follow on this.

[Editor’s Note: Tim Price, Director of Investment at PFP Wealth Management in the UK and frequent Sovereign Man contributor, is filling in for Simon today.]