“The Most Interesting Story at This Time is Gold” 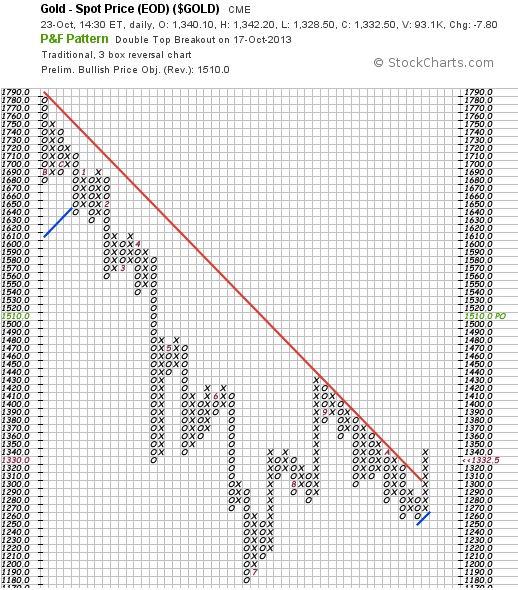 “Turning to the market, fund managers are in the strangest predicament I have ever seen since I started writing 60 years ago.  The basic problem is the immorality of printing unbacked, intangible fiat money.  For years I’ve called fiat money basically immoral and an insult to the US constitution.  Unfortunately, our children and grandchildren will suffer the results of years of fiat currency printing.  Yes, even Wall Street is subject to the laws of morality.

The Fed has placed us in a dangerous situation.  At the slightest hint of cutting back, the markets go into a swoon.  This means that the FED must continue with QE.  On that basis we might as well play the FED’s game.  This would mean buying the DIAs and staying with them until the edifice begins to weaken.  Signs of weakening will be declining volume as the market climbs.

Finally, as upside momentum runs out, the market will turn down.  Nobody can identify the peak of momentum, so we’ll have to depend on volume.  This is a dangerous game and not everyone has to play it.  Personally, I don’t have the stomach to play this latest Wall Street game of musical chairs.

As for gold, I continue to think that this is a game of patience.  The world is battling the forces of deflation and it’s going to take an increasing amount of QE just to stand still … The most interesting story at this time is gold.  It’s a question of buying stocks at all-time highs after the averages have doubled, or gold, the despised metal that appears to be pushing out of an impressive base.

I realize that money managers have to show profits or income in a hurry.  But my subscribers and I have time on our hands.  We have the luxury of sitting on the sidelines or buying and waiting for results.  My feeling is that buying gold just off the current base will work out.  And the risk of substantially lower prices is minimal.  As I write, gold is in the process of enlarging its already impressive base.

I continue to like the action of gold, now well above its red trendline.  Remember that patience is key. Despite flagrant technical discrepancies, the markets are following the lead of the Fed, and it appears that as long as the Fed pours on the QE, the stock markets will follow.  In the meantime, gold continues its climb out of its huge base formation.  As I see it, as far as holding stocks or gold, the greater risk lies in stocks.

From the Kiplinger letter:

China is boosting its foreign investment.  It will ladle out $1 trillion over the next decade. And increasingly, it has its eye on the US. By 2023… $15 billion to $20 billion a year to snap up American assets.  And that’s in addition to whatever US treasuries China continues to buy.  Beijing already holds nearly $1.3 trillion of them.

There are 2 million reasons for this surge: China’s $4 trillion foreign currency stash … euros, pounds, yen, dollars and more … racked up over decades of exporting far more than it imported.  Beijing wants more of it put to work in investments other than today’s low-yielding US treasuries.

And an interest in acquiring US expertise and technology … needed more and more as China shifts its economy from one largely fueled by exports to one that is powered by domestic consumption.

Russell comment — Watch for China to buy US assets as fast as they politically can.  In the meantime, China is intent on amassing the world’s largest hoard of gold.  The Golden Rule; “He who holds the gold makes the rules.”