This Is What Gold Does In A Political Crisis, “Trump Might Actually Win” Edition 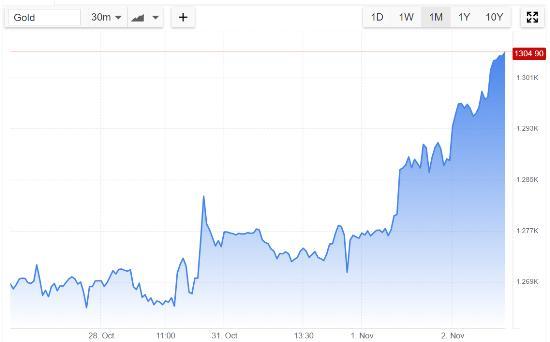 A week ago it looked like the US government was destined to end up firmly – maybe even more firmly — in the hands of the banks, public sector unions and defense contractors. Trump was imploding and the markets were basking in the prospect of never-ending liquidity from a re-energized Fed. And safe-haven assets like gold were being dumped in favor of growth stocks and the like.

Then Anthony Weiner reached out from the grave to throw the result back into doubt. Polls have tightened, especially in crucial swing states, and it’s now at least conceivable that an outsider will gain control of bank regulation and nuclear codes, with all the uncertainty that that implies.

Today’s markets, addicted as they are to government coddling, don’t like this idea one bit, and capital is suddenly running scared. Where’s it going? Where it always goes in times of uncertainty, straight into precious metals: Now it’s completely possible – maybe even probable – that come November 9 the establishment holds onto power, in which case the panic will subside and capital will flow back out of precious metals. But that won’t matter long-term for at least two reasons.

First, the financial stability that results from central banks buying up bonds and stocks and guaranteeing the derivatives books of the big banks is illusory. Governments have a tiger by the tail, and as debt continues to soar around the world that tiger will grow more and more frenzied. Eventually it will turn around and eat the idiots who presumed to control it, which is to say a debt-driven crisis of epic proportions becomes more likely with every new multi-billion-dollar bond offering. And when the bust comes, panicked capital will behave the way it did in 2009, pouring into assets like gold that can’t be created in infinite quantities by out-of-control governments.

Second, Trump was just a warning shot. He proved that there’s a political market niche for someone willing to point out the fatal flaws and inequities of the current system, and the unprotected class is ready to follow a less flawed version of Trump in massive numbers. So next time around someone more polished will pick up that torch and win by a landslide. Then this week’s political uncertainty will return with a vengeance, once again sending capital pouring into safe havens.

1) Trump wins and today’s gold bull market is turbo-charged, with $100 up days becoming the norm for a while.

2) Clinton wins and business as usual continues until the system collapses under the weight of its own corruption – setting off a stampede into precious metals.

3) The next election features a Trump sans the horrendously rough edges, who wins a mandate from both right and left to break up the banks, audit or abolish the Fed and close down the global military empire. And terrified establishment capital pours into gold.

However your slice it, the big trends all point towards chaos. And chaos is always and everywhere good for precious metals.