This Is What Gold Does In A Currency Crisis, Canadian Edition 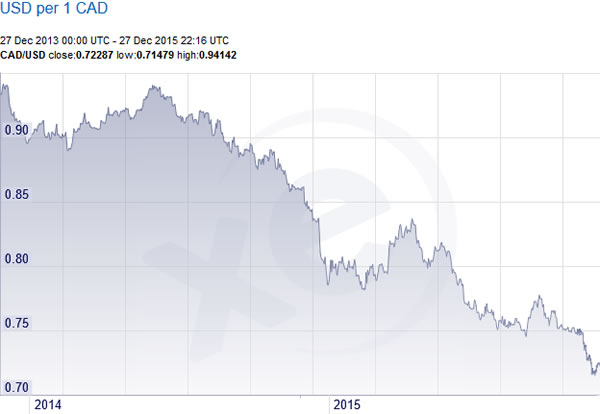 Along with the currencies of most other commodity-exporting countries, the Canadian dollar has been in near-freefall lately. Gold, meanwhile, has been sucked down with the rest of the commodities complex, falling hard since 2013. But only in US dollars. For Canadians, with their weak domestic currency, gold has been behaving just fine. It’s up 17% in C$ terms over the past two years and looks ready to rally from here: Protection from currency trouble is why people own it, and why in the vast majority of places it’s owners are very happy.

Now combine a falling currency with a crashing oil price and the result is a surprisingly favorable environment for Canadian and other weak-currency-country gold miners. Big mostly-Canadian miner Goldcorp, for instance, has seen its production costs fall by almost 20% in USD terms in the past two years, with more to come based on the subsequent cheapening of the diesel fuel required to run its equipment.

If 2016 plays out according to the script that has rising US interest rates producing an even stronger dollar (and correspondingly weaker currencies elsewhere) the terms of trade for non-US gold miners should become even more favorable. Many of them will report positive earnings comparisons while most other industries are doing the opposite, putting them on the radar screens of momentum traders and value investors who haven’t been paying attention since the last gold/USD bull market ended.

The Recession And Bear Market Of 2016, In Two Charts