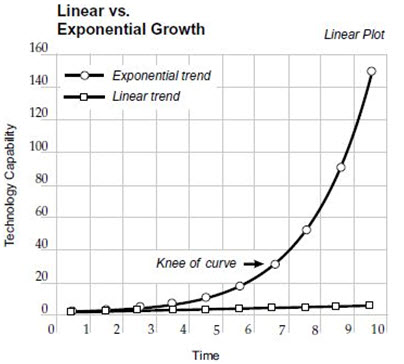 Do you have forebodings about the future?  I do, which is why I’ve been looking closer at the transformations technology promises to bring us. Note: be sure to read through to 3D Printing — a hint of the APM future – Money Talks Editor

First, a brief review.  I’ve previously written about the rapid pace of technological development (here and here) and Ray Kurzweil’s point that though technology is growing exponentially, we experience it linearly, and we tend to base our expectations on our linear experience.  (See his essay “The Law of Accelerating Returns” for details.) Here’s an example. When the Human Genome Project began in 1990 he predicted the project would be completed in 15 years.  Almost no one believed him.  After a year of work, biochemists had succeeded it transcribing one ten-thousandth of the genome.  Seven years later a mere one percent had been finished.  One imagines the laughing was well underway.  But the project actually finished ahead of schedule, in 2003.

In The Singularity is Near Kurzweil explains how this happened:

He has been amazingly accurate in his predictions, and over the years he’s turned those predictions into a fortune inventing and marketing products based on his expectations of the technologies that will be available in years ahead. “Invention is a lot like surfing,” he says, “you have to catch the wave at the right time.”

Kurzweil sees three overlapping areas where growth is increasing exponentially and which will transport us to a world formerly associated with science fiction and fantasy: genetics, nanotechnology, and robotics.

In this article I want to discuss nanotechnology — a term popularized by K. Eric Drexler in his 1986 book Engines of Creation: The Coming Era of Nanotechnology (online here) — and its implications for our economic lives.

By “nanotechnology” Drexler means “technology based on the manipulation of individual atoms and molecules to build structures to complex, atomic specifications.”  To distinguish his meaning from other, more inclusive definitions he uses the term atomically-precise manufacturing (APM).  APM will build things by rearranging atoms and using those nano-structures as building blocks for larger products.

What kinds of products?  Everything being built today by conventional means and other products that can’t be built today.

Materials are characterized by their arrangement of atoms — if we rearrange the atoms in coal a certain way we can produce a diamond.  Atomically-precise control of materials can produce patterns of atoms that are out of reach of today’s technologies.

In his 2013 book Radical Abundance: How a Revolution in Nanotechnology Will Change Civilization, Drexler tells us that

Atomic precision starts with small-molecule feedstocks, atomically precise by nature and often available at a low cost per kilogram. A sequence of atomically precise processing steps then enables precise control of the structure of materials and components, yielding products with performance improved by factors that can range from ten to over one million.  [my emphasis]

APM will change industrial production beyond recognition or replace it outright.

Traditional manufacturing builds in a “top down” fashion, taking a chunk of material and removing chunks of it – for example, by grinding, or by dissolving with acids – until the final product part is achieved. The goal of nanotechnology is to instead build in a “bottom-up” fashion, starting with individual molecules and bringing them together to form product parts in which every atom is in a precise, designed location.  [Foresight Institute]

Drexler likens APM to digital technology transferred to the material world, in which microblocks are combined much like ink droplets to form endless, intricate patterns.

A better analogy than ink droplets, however, would be blocks of the sort found in high-end Lego sets, which include not only blocks in different shapes and colors, but also blocks that provide intricate, functional parts such as motors, gear trains, sensors, and computers.

replacing an enormous automobile factory and all of its multi-million dollar equipment with a garage-sized facility that can assemble cars from inexpensive, microscopic parts, with production times measured in minutes.

The technologies that can make these visions real are emerging—under many names, behind the scenes, with a long road still ahead, yet moving surprisingly fast.

The need for engineering

As with the stunning nature of Kurzweil’s predictions for the decades ahead (which you really ought to check out), it’s difficult to imagine the economic world as we know it being turned upside down because we’re slipping past the knee of an exponential curve.  Yet APM is not waiting for some scientific breakthrough to make it a real possibility.  The road ahead “has no gaps, no chasms to cross,” Drexler says.

The semiconductor industry provides a model for coordinating research to advance the technology of an entire field. What’s more, the achievements of semiconductor engineers give us a sense of the potential scale of results, for it was their work that brought us nanoscale digital information systems and today’s Information Revolution.

Roadmapping has been the key to the success of the semiconductor industry.

In 2007, under the auspices of the Waitt Family Foundation, researchers in nanotechnology finally produced a guiding document for their field: Productive Nanosystems: A Technology Roadmap.  The Executive Summary tells us that:

It is uncontroversial that expanding the scope of atomic precision will dramatically improve high-performance technologies of all kinds, from medicine, sensors, and displays to materials and solar power. Holding to Moore’s law demands it, probably in the next 15 years or less. [My emphasis]

Assuming the document is up-to-date, APM should be here by or before 2022.  Mark your calendars.

3D Printing — a hint of the APM future

The nascent technology of 3D printing is a stepping stone between traditional manufacturing methods and APM.  Drexler contrasts 3D with traditional processes:

Some traditional methods make a shape all at once using a costly, specialized tool, like a mold to shape plastic, a die to stamp steel, or an optical mask in semiconductor lithography. Other traditional methods carve shapes by removing small bits of material using general-purpose equipment like lathes, drills, and milling machines.

One 3D printer is a kit you assemble yourself called the RepRap.  With a RepRap 3D printer, you can “print” the parts that make up a RepRap and assemble them yourself.  According to the video at the RepRap website, the RepRap project aims to put a factory in every home — a factory that can make more factories.  RepRap has a slogan, “wealth without money.”

RepRap and other 3D printer user communities stir memories of the Homebrew Computer Club that launched the PC revolution in the mid-Seventies.  The Club spawned many pioneers in the microcomputer industry, including the two Steves.  The MITS Altair 8800 was one of the first kit computers, comparable to the RepRap today.  Unlike Altair, RepRap can self-replicate.

There are downsides to every technology.  As with clubs and axes once used to obtain food and shelter, APM technologies can be weaponized.  The good news is that APM, like information technologies, has a strong decentralizing and price deflationary component.  In this sense it works in favor of individuals and free markets, and against the Keynesian states we live under.  The APM revolution has the potential to dramatically empower people, as we’re seeing with the information revolution today.

Though there are many questions one could raise about APM, I have one in particular that I invite any APM researcher to address: If APM continues to develop into a Kurzweil future, will someone someday be able to “print” gold and other precious metals?

And further: The whole of economics is based on scarcity.  APM won’t eliminate scarcity, but it could surely relegate it to a position of less importance since common feedstocks will replace scarce resources.  What does a world with scant scarcity look like?

We are encouraged by psychologists to live in the present, in the here-and-now.  The here-and-now has many dimensions, one of which is the legacy of innumerable statists.  I look forward to a “present” when their legacy is found only in history books.  Technology will help get us there.