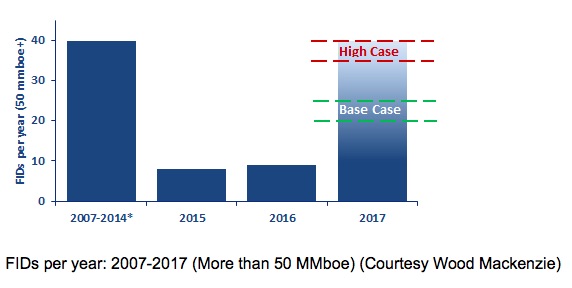 Here’s one of the most important charts we might see in oil and gas this year. New this week from industry watchdog Wood Mackenzie — showing how many offshore petroleum projects will likely see final investment decisions (FIDs) during 2017. There are a few important things to note here. First, approvals of new petroleum projects were running strong between 2007 and 2014 — with the blue bar on the left showing how FIDs during this period averaged 40 projects per year.

Move to the 2015 however, and approvals for new project construction fell off a cliff. With only 8 projects getting off the ground that year.

The past year wasn’t much better — with only 9 projects reaching FIDs during 2016.

That drop-off was triggered by falling crude prices globally. But here’s the good news — even with oil still languishing at $50 per barrel, Wood Mackenzie thinks the coming year will be very good for new projects.

Why are so many projects making a comeback even at lower oil prices? Two words: lower costs.

Wood Mackenzie points out that capital costs for offshore projects have fallen 20% since 2014. A fact they say will raise internal rates of return on new projects to an average 16% this year, well above the 9% average IRR for projects launched three years ago.

All of which shows lower commodities prices are manageable, for the right projects. The consultants say the biggest winners will be smaller projects that benefit most from cost reductions — watch for announcements on project go-aheads for small to mid-sized fields (and likely a few bigger ones) as the year goes on.