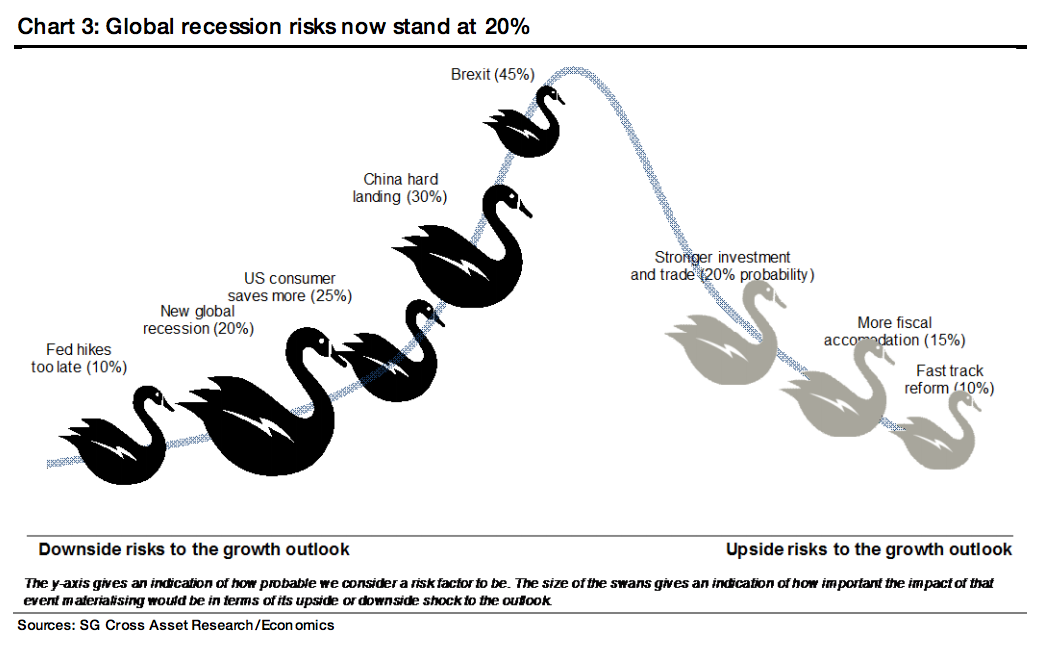 Societe Generale is out with its latest quarterly chart of so-called swan risks that threaten to rock the global financial markets. For the most part, the risks remain unchanged from November.

SocGen analysts reiterated that the two highest-probability risks were a British exit from the eurozone, or Brexit, (45%) and an economic hard landing in China (30%). And with the Brexit specifically, there’s the potential economic ripple effect into the rest of Europe, which is already more politically divided than it has been in ages.

The one change from the firm’s most recent black swan chart is that the risk of a new global recession has increased to 20% from 10% in late 2015.

Notably, the size of the swan indicates how big of an impact a given risk would have should it come to be. So although out of the listed risks, SocGen thinks that a Brexit is the most likely to happen, it would not be the most impactful.

“Common to all these risks is the financial conditions component that has the potential to act as an amplifier, both in terms of the individual risks and in linking them together, making each more likely,” the SocGen team wrote.

It’s worth noting that, technically speaking, black-swan risks are by definition extremely unlikely and nearly impossible to predict. So it’s a bit of a contradiction to assign such high probabilities to any of these events. Nevertheless, when these events do materialize, it’s bad. SocGen’s swan chart is just trying to show that major economic and geopolitical risks are brewing that could cause serious problems should they ever come into fruition.

Check out all the stewing swans below. NOW WATCH: This is what Carl Icahn would do first if he ruled America