The Yin and Yang of Gold, and Turning Points … 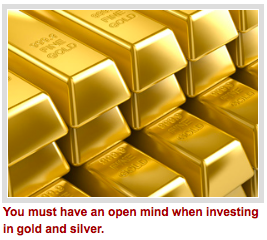 Over the past couple of weeks, gold has managed a meager rally. Yet, despite the rally — and all the whoopla about it from the public and talking heads — gold has not given me any buy signals.

I doubt that gold can get that high. But even if it were to do so, it would not indicate that a new bull market had begun. Rather, it just might be the final fake-out before gold heads back down, to new lows below $1,000.

Ditto for silver. Its recent rally is also weak at the knees. No buy signals hit. Massive resistance at $16.28 all the way up to $17.

It concerns me. Why? Because I know there are scores and scores of investors who are now buying gold and silver (and mining shares) — which will result in terrible losses.

Look, I agree that long-term gold can be an excellent store of value. And someday, gold will head north of $5,000 an ounce. Silver north of $150.

And just as important, you must have an open mind when investing in gold and silver. You can’t get married to your metal (or any investment for that matter) — as if investing in precious metals was some sort of religion. For instance, you have to realize that sometimes, gold is money … and sometimes it simply isn’t money. Or even a store of value.

Right now, gold is not money. Just consider what’s happening in Europe. The wicked and aggressive devaluation of the euro is actually starting to set off a massive stampede OUT of gold and into cash and other assets.

Why would Europeans dump gold, especially when their currency is being devalued?

It’s simple. The recent sharp decline in the euro caused the price of gold in euros to spike higher, while the dollar price of gold essentially went nowhere. So savvy European investors are cashing in their profits.

Moreover, European investors want liquidity, with a capital “L” — and holding on to gold is not a liquid situation.

Moving physical gold around isn’t so easy. It takes time and money to move your gold. And even then, you won’t know how safe your gold is, because in the back of your mind there’s always that fear that it could be lost or stolen.

There’s more: Think of all the government debt in the world that’s going bad. We’ve already seen Cyprus sell part of its gold reserves to liquidate debt. Now, Venezuela is rumored to be looking to sell as much as 80 tons of gold to meet debt payments due of $5 billion.

The bottom line: While gold will indeed soar again at some point, there are times when forces that are seemingly bullish for gold are actually bearish. Like unpayable government debt. Like a declining currency, like the euro, which forces the euro price of gold higher, allowing European investors to sell gold and get liquid.

Mostly, all you have to do is put yourself in the shoes of a European investor right now who owns gold.

You also know that your European leaders may confiscate money from your bank account, just like they did in Cyprus a couple of years ago.

You’re also frightened that Putin may soon make another aggressive move toward Ukraine, or worse, toward Estonia, Lithuania or even Poland.

And that the Syrian and Middle East refuge crisis is tearing the European continent apart.

So you conclude you need cash, lots of it. Your decision is simple:  Dump your gold, get liquid and get out of Dodge.

Then, either pay off some bills that need to be paid (before the euro becomes worth even less) … or get it out of the euro and into another country with a currency that’s at least losing value less quickly.

Or even better, into an investment that has a decent return, decent profit potential, and in a country and a currency in better shape than Europe’s.

Pretty simple to understand, no?

Later, in the not-too-distant future, the same fears of confiscation of wealth, rising taxes, bank failures and more will hit the United States and the dollar. At that time you’ll need to move your money yet again.

So you see, none of this is all that hard to understand provided you keep an open mind, question the conventional, and do your own independent thinking.

Timing everything, is of course the key. And while no one has a crystal ball …

There are methods I use that often get me very close to ideal turning points in key markets.

All I can tell you right now is that there are several key turning points arriving between now and the end of the year. Turning points that — if you act quickly and without bias — can help you get set up to make a fortune in the months and years ahead.

One of those turning points includes gold and silver.

So stay tuned and best wishes, as always …