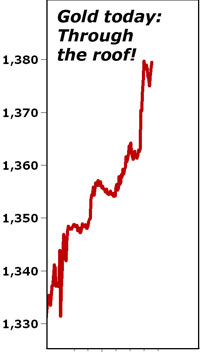 Over the past week or so, gold cracked through support at the $1,583 level, then bounced back up, and then plunged anew.

Now, gold is dangerously close to giving a MAJOR sell signal. Once it closes below the $1,527 level — you can kiss gold goodbye. It will plunge to $1,380 an ounce — and possibly lower.

Why do I keep harping on gold and silver in this column? Because I know there are scores and scores of investors who are getting bad advice that will result in terrible losses.

Look, gold IS the ultimate store of value. That is true. And someday, gold will head north of $5,000 an ounce.

Just as important, you must have an open mind when investing in gold and silver. You can’t get married to your metal (or any investment for that matter) — as if investing in precious metals was some sort of religion.

For instance, you have to realize that sometimes gold is money … and sometimes it’s not.

Right now, gold is not money. Just consider what’s happening in Japan. The wicked and aggressive devaluation of the Japanese yen is setting off a massive stampede OUT of gold and into cash and other assets.

If you don’t believe me, then read this recent article in The Wall Street Journal.

Why are the Japanese dumping gold, especially when their currency is being devalued?

It’s simple. The fall in the Japanese yen caused the price of gold in yen to spike sharply higher. So Japanese investors are cashing in their profits.

In addition, Japanese investors want to either spend their gold proceeds, or move it into other assets. They need liquidity. And holding on to gold is not a liquid situation.

It’s very easy to understand. This sort of thing is also happening in Europe, where gold demand is also down.

Why? Because if you have money in a bank, Cyprus has proven that European leaders will stop at nothing to try to solve Europe’s crisis, even if it means confiscating your money from your bank.

Gold’s not going to do you much good in that situation. If you take your money out of the bank and buy gold, how are you going to pay for the basic necessities in life?

Moreover, how are you going to move your gold out of the country, if that’s what you wish to do (which many Europeans are indeed doing)?

Moving physical gold around isn’t so easy either. It takes time and money to move your gold. And even then, you won’t know how safe it is, because in the back of your mind there’s always that fear that your gold could be confiscated.

The bottom line: While gold is indeed the ultimate long-term store of value against depreciating currencies and failing governments, there are times when forces that are seemingly bullish for gold are actually bearish.

All you have to do is put yourself in the shoes of a Japanese investor who owns gold. The price of gold is spiking higher. Meanwhile, you know you have to get your money out of the yen because the yen’s only going to be further devalued.

So you know you need cash, lots of it. Simple decision: Take advantage of the yen’s spike higher in gold, dump your gold and get liquid with cash.

Then, either pay some bills (before the yen becomes worth even less) … or get your money out of yen and into another country with a currency that’s at least losing value less quickly.

Or even better, into an investment that has a decent return, decent profit potential, and in a country and a currency in better shape than Japan’s.

Demand Falling in Europe, Too

Now put yourself in the shoes of an investor in Europe. You now know that European leaders may confiscate money from your bank account. You also are pretty much convinced that the euro is destined to fail.

Therefore you need to move your cash out of the European banking system. To do that, you have to sell your gold for U.S. dollars, and move your money, most likely to either Asia or the U.S.

Later, in the not-too-distant future, the same fears of confiscation of wealth and further devaluation will hit the United States. And at that time you’ll need to move your money yet again.

So you see, none of this is all that hard to understand provided you keep an open mind, question the conventional, and think independently.

You’ll be surprised how doing that can turn you into a successful investor.

I repeat my warnings of last week …

Do NOT look to gold and silver for safety right now. Ditto for mining shares.

If you are loaded up with gold, silver, or mining shares and don’t want to sell, for whatever reason, then at least consider hedging.

Stay mostly in the dollar now. The greenback is in an intermediate-term bull market as the euro is at the beginning of its end, and the Japanese yen is going to be aggressively devalued.

Don’t be afraid to buy U.S. stocks. Though a pullback is overdue, the U.S. equity markets are very strong.

Just keep in mind that the new bull market in stocks really has nothing to do with corporate earnings or the economy. The strength in our equity markets is largely due to capital flight out of Europe and Japan, and out of European and U.S. sovereign bond markets.