The Yield Curve is Critical of Fed Credibility 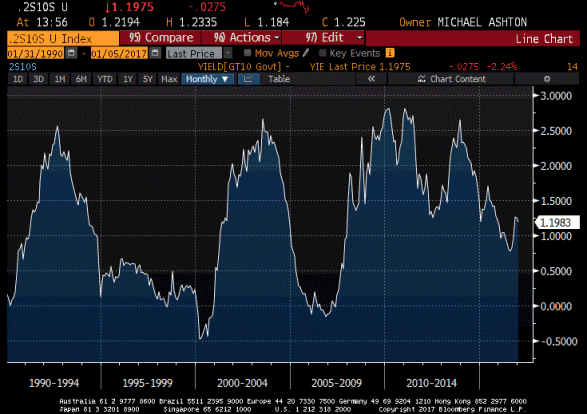 I was planning to write an article today about the shape of the yield curve. Since the Global Financial Crisis, the Treasury curve has been very steep – in early 2010 the 2y/10y spread reached almost 300bps, which is not only unprecedented in absolute terms but especially in relative terms: a 300bp spread when 2-year yields are below 1% is much more significant than a 300bp spread when 2-year yields are at 10%. But what I had planned to write about was the phenomenon – well-known when I was a cub interest-rate strategist – that the yield curve steepens in rallies and flattens in selloffs. The chart below shows this tendency. The 5-year yield is on the left axis and inverted high-to-low. The 2y/10y spread is on the right axis. Note that there is substantial co-movement for the recession of the early 1990s, throughout the ensuing expansion (albeit with a general drift to lower yields), in the recession of the early 2000s, the ensuing expansion, and the lead-up to the GFC.

I was ready to point out that the steepening and flattening trends tend to be steady, and I was going to illustrate that they feed on themselves partly for this technical reason: that when the curve is steep, steepening trades (selling 10-year notes and buying duration-weighted 2-year notes, financing both in repo) tend to be positive carry and therefore easier to maintain, while on the other hand when the curve is flat the opposite tends to be true. So the actual causality of the relationship between steepening and rallies is more complex than it seems at first blush.

It would have made a very good article, but then I noticed that since 2010 or so the tendency has in fact reversed!

This is interesting. Clearly, carry dynamics cannot explain why the relationship is inverted. I think the answer, though, is this: since 2010, the overnight has been anchored. That isn’t different than in the past – from late 1992 to early 1994, the Fed funds target was anchored at 3%. But the difference is that back then, traders acted as if the Fed might eventually move the overnight rate in a meaningful way. Since 2010, investors and traders have attributed no credibility to the Fed, with virtually no chance of a substantial move over a short period of time. Accordingly, while short interest rates historically have tended to be the tail wagging the dog, while longer-term interest rates move around less as investors assume the Fed will remain ahead of the curve and keep longer-term inflation and interest rates in a reasonable range…in the current case, short term rates don’t move while longer-term rates reflect the market belief that rates will eventually reach an equilibrium but over a much longer period than 2 years as the Federal Reserve is dragged kicking and screaming.

I happen to agree, but it isn’t a great sign. I suppose it was destined, in a way – “open mouth” operations can only work in the long run if the Fed is credible, and the Fed can only be credible in the long run if it delivers on its promises. But it hasn’t. This is probably because the Fed’s forecast have been worse than abysmal, meaning its promises were based on bad forecasts. In such a case, changing one’s mind when the data changes is the right thing to do. But even more important, if your forecasts are frequently wrong, is to shut up and stop trying to move markets where you want them with “open mouth” operations. I have said it for 20 years: the worst thing Greenspan ever did was to make “transparency” a goal of the Fed. They’re just not good enough at what they do to make their activities transparent…at least, if they want to maintain credibility.

Administrative Note: On Monday I will be conducting the third and final in a series of webinars on inflation and inflation investing. This series will be done on the Shindig platform, sponsored by Enduring Investments, in cooperation with Investing.com. This webinar is on “Inflation-Aware Investing.” You can sign up directly with Shindig here, or find the webinar link at Investing.com.

P.S. Don’t forget to buy my book! What’s Wrong with Money: The Biggest Bubble of All. Thanks!