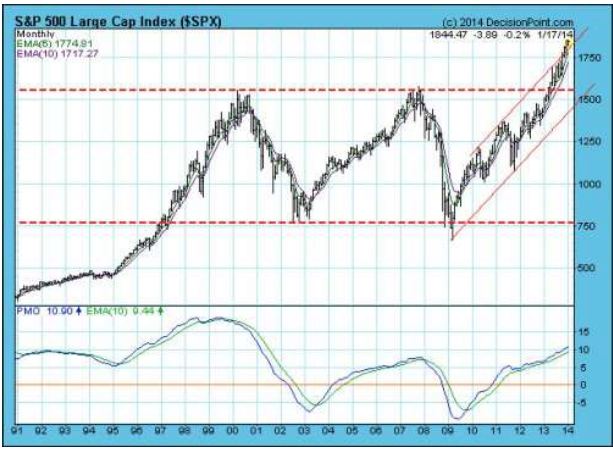 Some Things I Am Thinking About

Not a lot has happened in the markets really since the beginning of the year other than a bit of indigestion after last years “binge.”  Primarily, the story is the same with the markets overbought, bullishness remains extreme and “bad news is still good news” as long as it keeps the Fed’s “morphine” drip going. This week is a bit of a smorgasbord of things I am thinking about – a few nuggets that you can sample at your leisure.

Now note that the S&P 500 has recently broken out of a trading range that spans more than a decade.” I want to start with a very important snippet that I featured in Friday’s post on the website (5 Things To Ponder This Weekend) regarding a recent speech by Richard Fisher who is the President and CEO of the Dallas Fed (the link to the entire speech is in the post).

“Today, I want to muse aloud about whether QE has indeed put beer goggles on investors and whether we, the Fed, can pass the camel of massive quantitative easing through the eye of the needle of normalizing monetary policy without creating havoc.

When money available to investors is close to free and is widely available, and there is a presumption that the central bank will keep it that way indefinitely, discount rates applied to assessing the value of future cash flows shift downward, making for lower hurdle rates for valuations. A bull market for stocks and other claims on tradable companies ensues; the financial world looks rather comely.

Market operators donning beer goggles and even some sober economists consider analysts like Boockvar party poopers. But I have found myself making arguments similar to his and to those of other skeptics at recent FOMC meetings, pointing to some developments that signal we have made for an intoxicating brew as we have continued pouring liquidity down the economy’s throat.  Among them:

And then there are the knock-on effects of all of the above. Market operators are once again spending money freely outside of their day jobs. An example: For almost 40 years, I have spent a not insignificant portion of my savings collecting rare, first-edition books.  Like any patient investor in any market, I have learned through several market cycles that you buy when nobody wants something and sell when everyone clamors for more.

Lance Roberts is the General Partner & CEO of STA Wealth Management, Host of the “Streettalk Live” Daily Radio Show (streamed live at www.streettalklive.com), and Chief Editor of the X-Report and the Daily X-Change Blog.
Follow me on Twitter: @streettalklive