The World Has Less Than 5 Days Worth Of Copper Inventories 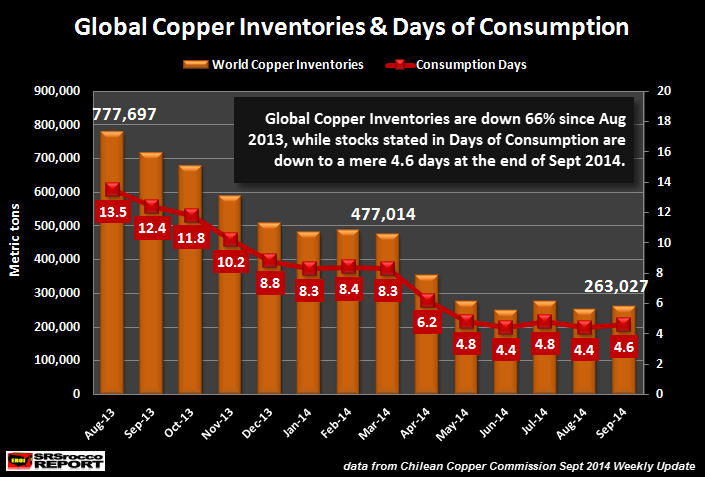 According to the financial media, the global economy is supposedly rolling over causing a glut of inventories producing a deflation in the prices of many commodities.  If this is the case… someone should tell that to King of base metals… Copper.

Something doesn’t seem to be making sense in the copper market as the price continues to decline, so are the level of global copper inventories.  You would think the opposite would be the case, but we must remember in the new Financial Paradigm — Paper assets such as Derivatives, Stocks and Bonds are KING, while Gold-Silver and commodities are GARBAGE.  Which is why (according to their mentality), financial assets are what we should EAT, while gold-silver and commodities are what we flush down the toilet once we are done digesting and consuming them (put another way–CRAP).

If we look at the chart below, we can see a very interesting trend taking place in global copper inventories.  Not only are we are near record lows, we are down to less than five days worth of copper inventories: Now, if we look at the current data, shown on the right side of the chart, total global copper inventories are now at 263,027 mt at an impressive 4.6 day supply (sarcasm).  And of course, the price of copper fell from a high of nearly $3.30 in June, to around 3 bucks today.

Let’s compare copper inventories at the end of September, going back to 2009.

Here we can see that end of September copper inventories in 2014 are the lowest in six years…. and at a 4.6 day supply.

Just maybe the copper traders know that inventories are going to header higher by the end of the year if the global economy continues to shrink.  However, a 4.6 day supply of copper doesn’t seem like the demand for the king base metal is really falling all that much… or am I missing something here.

Lastly, there is speculation that the Chinese may be buying and hoarding copper that isn’t recorded in the “Official Inventories.”  I say… so what.

If I were Asian or Chinese, I would rather spend $1.8 billion to purchase the rest of the 263,000 mt of global copper inventories than spend another lousy RED CENT on U.S. Treasuries that will become worthless at some point in the future.

After reading some of the comments below the article, I did additional research that might help answer some of the questions raised.  However, the more I looked into to the global copper market, the more bizarre it became.

While it’s true that China recently had a probe into its Copper Financial Deals (now gone bad), this became public in 2013 and was addressed early this year.  If it is true that China has all this extra copper in inventory… then why did Chinese Copper imports increase 18.7% year-over-year in the first seven months of 2014???  (source of data from this Reuters article).

Again, if we knew that the Copper Financing Deals were coming apart back in May of last year (Zerohedge: The Bronze Swan Arrives:  The End of China’s Copper Financing), wouldn’t this copper market imbalance be worked through by now?  I mean, its been nearly a year and a half.  By the way, thanks reader houstskool for posting that link in the comment section.

Now, from Jan-Apr 2014, the world consumed -2.3% less copper, from 5.4 million metric tons in 2013, to 5.3 million metric tons in 2014… a DECREASE IN COPPER CONSUMPTION.  This isn’t much of a decline, but you would think for the first four months of the year, we would have seen a build in global copper inventories… due to an increase in production and a decline in consumption.  However, if we look at the chart above, global copper inventories actually DECLINED IN A BIG WAY in April, 2014.

So, here’s the question.  Why would global copper inventories be falling if global production is increasing, demand falling and China with a supposed GLUT of copper inventories to work through?  Does that make any sense whatsoever?

In one of the comments below, a reader put a link to a BNN interview with a copper analyst about the global copper market, which you can watch at the link HERE.  Basically, he goes on to say that they look at all the different Chinese warehouses and state there is a 250,000 mt global surplus of copper.  If that is the case… then WHY IN THE HELL aren’t global copper inventories RISING instead of FALLING over the past year???

You see, something just doesn’t make sense when we look at all the data.  Again, why did Chinese copper imports increase 18.7% Jan-Jul if they had all this surplus copper they could work through???

In conclusion… all I can say is SOMETHING FISHY THIS WAY BLOWS in the Global Copper Market.

Please check back for new updates and articles at the SRSrocco Report.  You can also follow us at Twitter below: