Presenting the decline of the West in two easy infographics 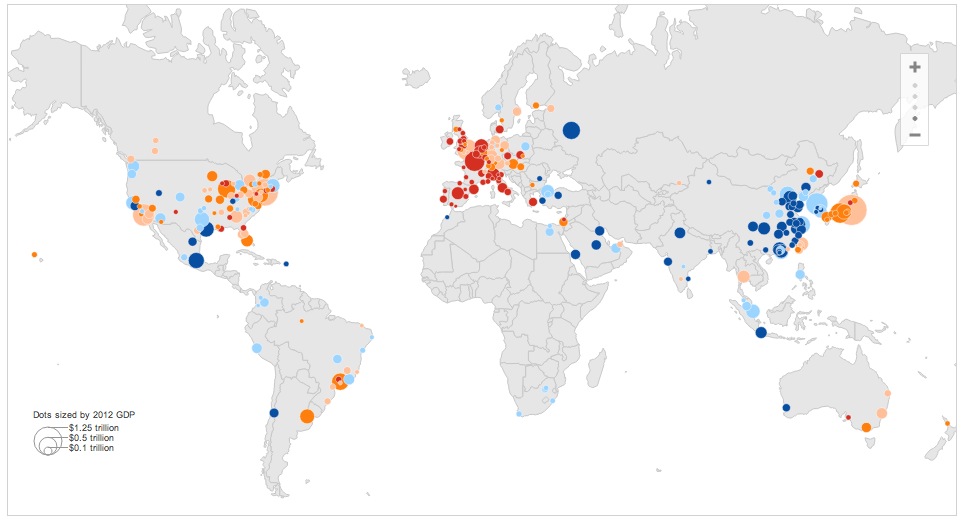 Two interesting infographics were published recently that make it so easy to see the decline of the West, even a caveman can do it.

The first is from the Brookings Institute, which has released an interactive map showing economic growth data for the largest 300 metropolitan areas in the world– from New York and London to Okayama, Japan and Wulumuqi, China.

The Brookings map ranks each of these cities based on economic performance over three distinct periods, measuring both GDP growth and employment trends.

The first time period is the last full year of data, 2011-2012. The second time period is that particular city’s economic low point since the global recession began in 2007. And the third period of time is a long-term view between 1993-2007.

The map then color codes each city by quintile. Dark blue represents the strongest economic growth over the three periods, orange and red represents the weakest.

(click HERE or on the image for an expandable & interactive version) Guess where most of the orange and red is? You got it. Europe, Japan, and North America.

Guess where most of the dark blue is? You got it. Asia, the Middle East, Eastern Europe… and right here in good ole’ Santiago, Chile.

If it weren’t already obvious at this point, I’d like to show you a second infographic, this one by Toshl Finance.

Toshl develops software to help people track and manage their finances, so the company has direct access to their customers’ earning and spending habits.

So who in the world is living within their means? Australian, Brazilian, Russian, Canadian, Filipino, and Indian users all show positive surpluses each month. Chinese and Singaporeans are essentially at breakeven levels.

Both of these infographics point to the same conclusion: the west is living far beyond its means and is struggling with pitifully anemic growth. This is a long-term trend, and one that is only going to accelerate.

The shift of wealth and power from West to East is going to be one of the biggest stories of our lifetimes, just as the decline of Rome was the biggest story of the day over a thousand years ago. Future historians will look back on our time and say “duh, the warning signs were there…” just as we do today when we study Rome, the Ottoman Empire, the Bourbon monarchy, etc.

Yet as obvious as the indicators may be, few people will actually do anything about it. A lifetime of propaganda will plant many heads in the sand, ignoring the dangers and opportunities all around. Only a handful will see the writing on the wall and take sensible, rational steps to set up their lives and families for generations of success and freedom.

Which will you choose to be?

In the last 3 months I’ve traveled to over 20 countries, met with a President and several diplomats, briefed sovereign fund managers, flown an aerobatic stunt plane, started several companies, hitchhiked in Bogota, taken a train across the orient, lectured on entrepreneurship in Eastern Europe, and personally provided venture capital to new start-ups.

I’m a student of the world, and I believe that travel is the greatest teacher. My knowledge is practical, and hopefully of significant use to you. Off the top of my head I could quote you the price of beachfront property in Croatia, where to bank in Dubai, the best place to store gold in Singapore, which cities in Mexico are the safest, which hospitals in Asia are the most cost effective, and how to find condo foreclosure listings in Panama.

I believe that in order to achieve true freedom, you have to be able to make money,control your time, and eliminate the mindset that you are subject to a corrupt government that is bent on degrading your personal liberty.

This blog is dedicated to those principles, and I provide concise, actionable informationeach day to help you achieve those ends. After all, it’s 2012… which means that it’s time to expand our horizons and consider, quite literally, the world of possibilities out there… all the things that the system told us were impossible, or not for “ordinary” people are, in fact, very much a reality: