The War for Spain 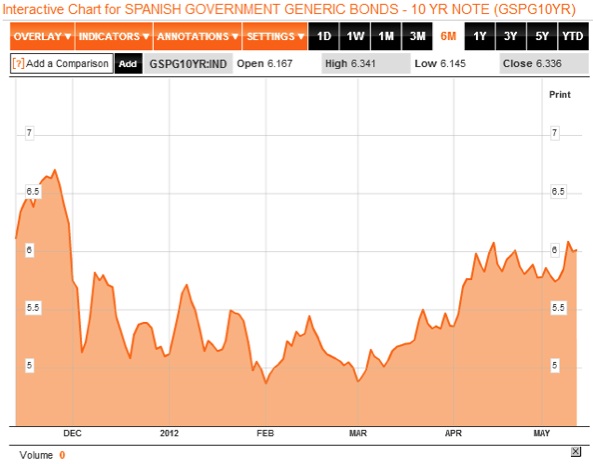 In my book Endgame, co-author Jonathan Tepper and I wrote a chapter detailing the problems that Spain was facing. It was obvious to us as we wrote in late 2010 that there really was no easy exit for Spain. The end would come in a torrent of misery and tears. Tepper actually grew up in a drug rehab center in Madrid – as a kid, his best friends were recovering junkies. (For the record, he has written a fascinating story of his early life and is looking for a publisher.) His Spanish is thus impeccable, and he used to get asked to be on Spanish programs all the time. Until the day came when the government created a list of five people, including our Jonathan, who were basically named “Enemies of Spain,” and pointedly suggested they not be quoted or invited onto any more programs.

As it turns out, the real enemy was the past government. We knew (and wrote) that the situation was worse than the public data revealed, but until the new government came to power and started to disclose the true condition of the country, we had no real idea. The prior government had cooked the books. So far, it seems it even managed to do so without the help of Goldman Sachs (!)

In about ten days I will be sending you a detailed analysis of all this, courtesy of some friends, but let’s tease out some of the highlights. True Spanish debt-to-GDP is not 60% but closer to 90%, and perhaps more when you count the various and sundry local-government debts guaranteed by the federal government, most of which will simply not be paid. Spanish banks are miserably underwater, and that is with write-offs and mark to market on debts that totals not even half of what it should be. If Spanish housing drops as much relative to its own bubble as US housing has so far (and it will, if not more), then valuations will drop 50%. The level of overbuilding was stupendous, with one home built for every new every person as the population grew. We know that unemployment is 23%, with youth unemployment over 50%. Etc, etc. We could spend 50 pages (which is what I will get you access to) detailing the dire distress that is Spain.