The US Dollar Bulls Are Falling for a DANGEROUS Trap… 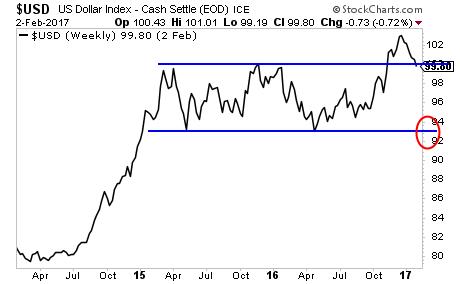 As we have repeatedly warning, anyone who is betting on the Trump Presidency unleashing a massive $USD bull market in the near future is going to get taken to the cleaners.

This has already begun…

One of the single most dangerous traps for traders to avoid is a “False Breakout.”

False breakouts are moves in which an asset “breaks out” of a formation, leading many to believe that the move is legitimate… then suddenly KA-BLAM, the move reverses violently.

See the $USD today. This looks more and more like a false breakout, which means YES, the $USD is going to sub 90s if not lower within 12 months. Those who believe Trump wants the $USD above 100 are not paying attention. Similarly, those who believe that the Fed can and will raise rates three times in 2017 are missing the big picture.

NEITHER OF THOSE IS GOING TO HAPPEN. And if you’re investing based on them, you’re in for a LOT of pain.