The Two Biggest Debt Caverns in the World … 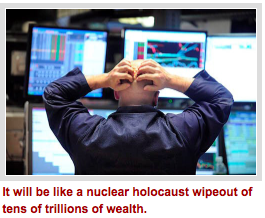 No, it’s not the so-called massive government debt problem in China. Like the stories of the ghost cities there, China’s debt problems are largely a myth, in the sense that it’s still largely a closed economy and monetary system. A communist economy where it’s largely the state owing the state … debts can be extinguished by the stroke of a pen.

I’m talking about the brewing U.S. pension crisis and Washington’s sovereign debt crisis, which is now here in spades.

I have been ramping up the warnings in these columns and in my new E-wave columns that now publish every Monday, Wednesday and Friday afternoons.

You know about the U.S. sovereign debt crisis. Washington is officially in debt to the tune of $20 trillion PLUS as much as another $200 trillion in “unofficial debts and IOUs.” So much pain is coming in the sovereign debt markets of Europe, Japan and the U.S. …

It will be like a nuclear holocaust wipeout of tens of trillions of wealth.

But there’s also the more personal hit of watching y our state and municipal pensions get gutted.

Currently in deficit by at least $1.3 trillion, the state and local pensions deficits are headed into their deathbeds and it will take nothing short of a miracle to turn them around.

Based on assumptions of achieving returns of roughly 6% to 8% for years on end now, they’ve been returning less than 1% in reality. The “gap” between those figures is bleeding pensions to death and will soon cause a massive coronary heart attack that will reverberate through state and local pensions …

Want a sneak peek at what it’s going to look like and cause? Simply look at the ongoing Greek labor unions and their protests over wages, pension and labor agreements which are now ramping up again big time.

Or look at California and Illinois where withdrawals from pensions and employees exiting the system are taking what money they can get now and heading for the hills and in record numbers.

I don’t think so, and if I were you I would do everything in my power to protect whatever funds I have in a state or local — and even corporate pension.

And I certainly would not rely on Social Security and Medicare. It’s not going to be there for you. Those programs will start breaking down late next year.

My view: Use the power of large macro-economic cycles that can foretell of these events well ahead of time.

Just like they did for those who profited enormously by correctly timing the Great Depression. They were, yes, in the minority — but it doesn’t have to be that way.