THE TRUTH ABOUT INFLATION … 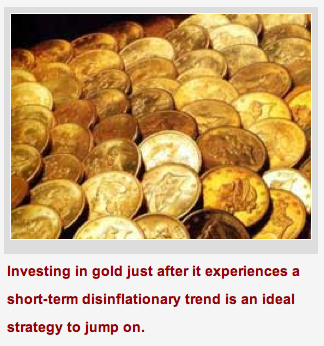 The most frequently asked question I seem to get, no matter the time period, is “Larry, don’t you see hyperinflation for the U.S. in the years ahead?”

So let me clarify my position, here and now. There was a time when I expected the U.S. economy would eventually experience hyperinflation.

But 21 months ago, when the price of gold failed to react to the Fed’s QE III announcement of virtually unlimited money-printing and the yellow metal entered an interim bear market, I knew something had radically changed.

There was the Weimar Republic, of course, but it was not a core economy for the world. There are the hyperinflations of Zimbabwe, Brazil, Argentina and countless other small economies that were never at the core of the global economy.

And upon further study, I found that even the Roman Empire, certainly a core economy during its reign, didn’t even die of hyperinflation.

It died largely because of abuse of power by politicians, which drove citizens away from the Empire; by rapidly rising taxation, which had the same effect; and by a corrupt Treasury and justice system that tracked down and confiscated citizens’ wealth, largely to fund increased military campaigns, which were hoped to revive the Roman economy. Sound familiar?

Was there high inflation in Rome before it fell? Yes, but nothing of the sort of hyperinflation like we subsequently saw in Weimar Germany or any of the countries I mention above.

So, then, what does the U.S. economy face? Further disinflation, eventual reflation or something else?

My view, and I am not hedging my answer or talking out of both sides of my mouth: We face a combination of further disinflation in the short-term, followed by a rather large jump in inflation a few months from now and heading into the future for at least three years.

How high will inflation eventually go? Hard to say, but I wouldn’t be surprised if, say, three years from now, we see 20% or even 25% inflation.

But I highly doubt we will ever see inflation in the thousands or even millions of percent. It’s just not possible in a core economy. For many different reasons.

Whether we have deflation or inflation is also the wrong way to think about the U.S. economy these days. The reason? Ever since we abandoned the gold standard, inflation and deflation have become two sides of the same coin.

In other words, they are both present in the economy at the same time. You can have certain goods and services and even asset classes deflating, while others are inflating. It’s as simple as that.

For instance, the price of LED TVs has crashed in the past year or so, as have the prices of laptop computers and many other goods. Not to mention real estate prices since their peak in 2007.

Nevertheless, there’s another important underlying force that you need to understand, another one that resulted from the abolishment of the gold standard.

A certain level of general, system-wide inflation is always baked into the cake. It’s due, again, to the fact that we no longer have a gold standard, but it’s also due to many other forces, such as population growth, limited availability of natural resources, the constant desire for people to improve their lives and more. And it’s also why investing in gold ? just after it experiences a short-term disinflationary trend ? is an ideal strategy to jump on.This is important to understand, because it’s the chief reason prices will be higher a year from now, five years from now and even 10 years from now … no matter what the U.S. or global economy does.

In other words, it deflated as the stock market inflated wildly during that time.

Keep in mind the above figures are based on the government’s conservative, politically manipulated Consumer Price Index. As we all know, it vastly understates inflation.

The bottom line: There are several.

First, yes, we have, and pretty much always will have, a base level of inflation in our economy. It’s the natural state of things.

Second, inflation will at some point in the future move even higher. But don’t expect hyperinflation.

Third, and perhaps most importantly, gold does not need any further inflation to move higher. It’s undervalued right now. And it will probably fall even a bit further.

That’s how markets work. They go from overbought and overvalued, to underbought and undervalued.

Thing is, the more undervalued an asset becomes, the greater the profit potential. That’s precisely why I am more interested in gold now than I’ve been since my initial “buy” signal way back in 2000. The profit potential is simply enormous.