The True Meaning of the Euro and Greek “No” Vote … 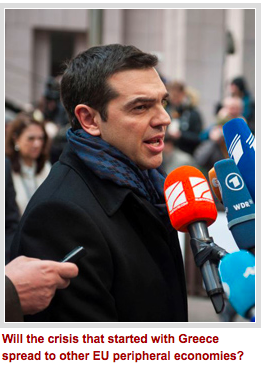 As I stated in last week’s column: “The Greek default is merely the opening act of the worst sovereign-debt crisis in history.”

And now that Greece has told European leaders to take a hike, the crisis will start spreading.

The consequences will unfold in a series of debt defaults, civil conflicts, social and financial upheavals and more.

It will spread — without a doubt — to the other peripheral economies of the European Union, namely Portugal, Spain and Italy.

Each one of them has unsustainable debts. Each and every one of them does not have the economic growth to support the debts. Each and every one of them will eventually have to go the way of Greece, at first defaulting, then trying to stay in the euro, and then finally recognizing that it’s impossible to do so …

And that the only way out for their citizens and their economies is to leave the euro and take back their own currencies.

You see, when the euro got started, it contained the seeds of its own destruction.

For one thing, European leaders tried to put a one-size-fits-all hat on all of Europe, through a single currency. Nice idea, but it failed to recognize the many disparate languages, histories and cultures of Europe.

For another, it subjugated each country’s sovereign identity to the powers that be in Brussels and Germany, robbing them of their democracies, and enslaving them to the wishes of European leaders who were nothing more than power-hungry mongers back then, in 1999 … and are even more power hungry today, to try and keep the euro intact.

And for yet another, those European leaders who expected to unite the Continent from a political perspective to avoid Europe’s long history of wars, they are about to see the entire experiment backfire.

For in the end, Europe’s euro advocates tried to do what Hitler tried: Unite the Continent into one union, one country, one financial system.

Whereas Hitler tried it militarily, and no doubt, was the most insane man ever …

Europe’s euro masters thought they could unite Europe peacefully through economic might.

But they were wrong, dead wrong, and the crisis that is now unfolding is going to produce precisely the opposite:

A Europe financially war-torn because euro leaders like Angela Merkel think they can call all the shots … think they can enslave other countries and people with debt … and dictate everything to them, under threats of no new loans, no humanitarian help, no futures unless you comply with their wishes.

But in the short-term, it’s not going to be pretty. For Greece, for other peripheral economies, for Europe as a whole.

Portugal will soon realize it can do the same and tell Merkel and Brussels to take a hike. Then Spain will jump into the fray. Then Italy, and more.

Conflict between the periphery and the core, namely Germany, will escalate.

And the entire process — as it unfolds over the months and years ahead — will turn everything you thought you knew about economics and financial markets, inside out and upside down.

While, on the flipside, what was once considered risky — like gold and precious metals, or even Greece’s stock market — will become the safest types of investments.

Mark my words: The crisis will change your life. It will threaten your finances like never before.

If you don’t have a handle on how the crisis will unfold, it will squash any chance you have at protecting and growing your wealth …

But if you do have a handle on it, not only will you be able to protect your wealth, you’ll be able to grow and multiply your wealth many times over.

My Real Wealth Report subscribers are not only tuned in to the crisis and what it means, they are and will always be prepared to protect their wealth and grow it as the crisis unfolds in the months and years ahead.

You can be too.

The first step is to educate yourself on how a crisis like this unfolded before.

For starters, I recommend reading Volumes II and III of President Herbert Hoover’s memoirs, available online for free via his presidential library.

Simply click on volumes II and III near the top of the page in his memoirs section to download the .pdf files.

Read them and pay particular attention to how he describes Europe’s sovereign debt crisis in the 1930s … and how capital darted back and forth around the globe “like a loose cannon on the deck of a ship in the middle of a torrent.”

It will open your eyes to how capital can move in times of crisis, and what kinds of investments are sought out, and why.

It’s the other side of the Great Depression that almost no one ever tells you about, yet is so very important for you to understand.

Your second step: Stay close in touch with my columns, and even better, consider joining my Real Wealth subscribers,
who, year-to-date, have handily beat the S&P 500 with a 13.3 percent return.