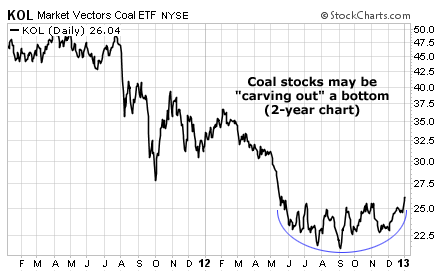 It’s an old saw in the resource industry that “you’re either a contrarian or a victim.”

In other words, you want to buy commodities when no one else wants them… and sell them when others will pay just about any price to get them.

Jeff was telling his readers about the opportunity in one of the most hated commodities on the planet: coal.

President Obama is publicly anti-coal. And coal competes with natural gas, which – as regular readers know – has become super-abundant and super-cheap here in the States.

In short, it’s not hard to find obituaries for the entire coal industry. But the world still needs coal. We need it to make steel and to fire power plants in parts of the world (like China) that haven’t tapped a new ocean of natural gas.

And the time to buy is when everyone thinks there’s no hope.

An easy way to make a bet on the coal sector is with the Market Vectors Coal Fund (KOL). This fund holds a basket of global coal producers, along with a few coal shippers and equipment makers.

KOL is down about 30% from its peak this year… and about 50% from its peak last year. But as you can see from the chart below, it looks like the fund is trying to “carve out” a bottom in the $22-$24 range. And if you look at the right-hand side of the chart, you can see the fund just broke out to a new seven-month high.

Breakouts can come on the downside or the upside. But whatever the direction, no trend can start without one. They act as a sort of “starter’s pistol” for rallies and declines.

A bet on coal right now isn’t a “sleep at night” trade. The coal industry may get even more hated before the cycle turns. And KOL will be volatile. After its recent run higher, it’s likely to see a natural correction. In case that pullback turns into another bust, consider setting a stop loss near the fall lows. That’s about 15% below today’s levels.

A recovery for the coal sector won’t happen overnight… but the cycle will turn in coal. And right now, it’s the contrarian bet.