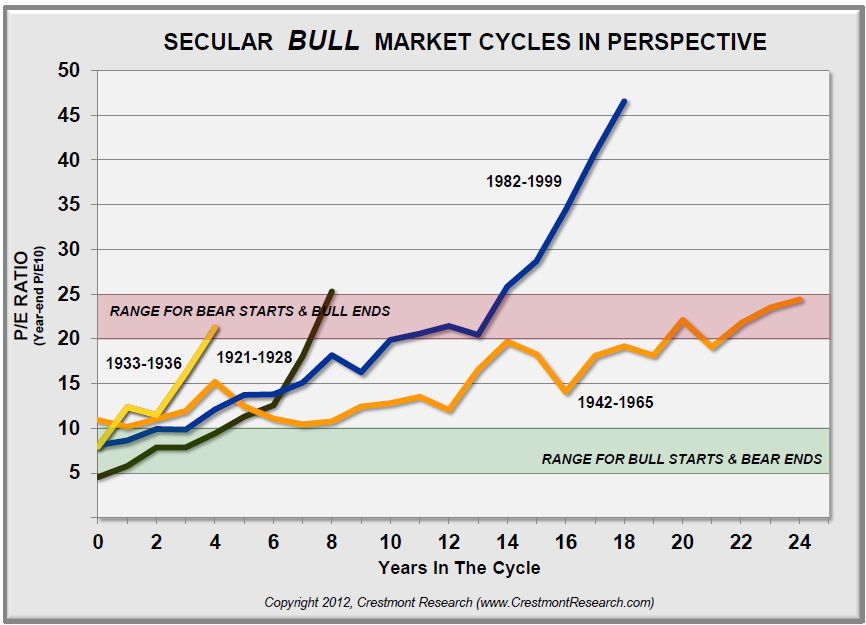 Let’s use 1982-2000 era as an example. The rise of technology – everything from software to semiconductors, mobile to networking, storage to biotech et. al. drove the broader economy. This led to record low unemployment, strong wage gains and high corporate profits. As you would imagine, stocks did exceedingly well in this environment. Asset allocations that were Equity-heavy did much better than those that carried lots of bonds and cash in that period. Conversely, the cycle that began in 2000 has rewarded bond and cash heavy portfolios and punished more equity-heavy ones.

Think about the many long-lasting positive elements that drove the post WW2 period (1946-66). You can list all of the negative societal factors that were a drag on the next secular bear period (1966-82).

Not understanding this cyclical backdrop is a common error. You should be more equity oriented during secular bull cycles and more tactical (i.e. bond and cash)  during secular bear cycles.

It is an investor’s job to preserve capital and manage risk during secular bear markets. During secular bull markets, maximizing returns are the top priority.

All investors need to understand what the secular backdrop is and adjust their allocations accordingly. Click on each Title below for an expanded explanation

4. You Are Your Own Worst Enemy

9. Past Performance vs Future Results

10. Not Getting What You Pay FOR

Welcome to The Big Picture!

The blog is a compendium of what a professional money manager is looking at, thinking about, and writing on. It is written by me (& the crew) for people ranging from investment professionals to media to anyone else interested in investing, markets, and the economy.

It is, by design, laden with facts, statistics, and informed, data-driven opinions. We avoid the squishy, touchy-feely “I think/hope/want” type of fact-free analysis so prevalent in the media and on Wall Street.

I have been writing about these topics for ~15 years, and blogging since 2003. By sheer accident, TBP has become one of the best reviewed finance blogs on the web. We key in on what you should be thinking about when it comes to markets and the economy — and what you should not be doing with your money.

The writing is designed to be very accessible — no PhD required. Hell, no college degree needed. If I can make this stuff understandable to my right brain art teacher wife and my 74 year old retired real estate agent mom, then I can help you learn the basics of markets, investing and the economy