The third wave of the global financial crisis 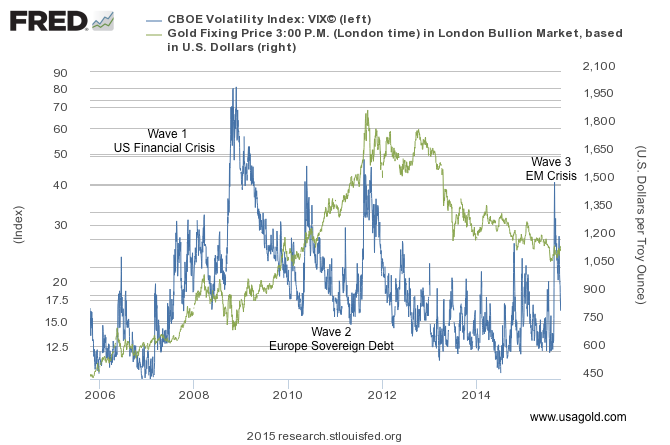 Massive artificial stock, bond wealth will be looking for a place to go

By the time Goldman Sachs published its widely referenced warning of a third wave in the global financial crisis (mid October), the physical precious metals’ markets were already feeling the strain of very strong demand against a rapidly dwindling supply. China, the country seemingly at the epicenter of the developing emerging market crisis, by itself had taken 911 tonnes of gold off the market in the first half of 2015 – a number when annualized that represents nearly two-thirds of the world’s mine production. India, another of the so-called BRICS nations (Brazil, Russia, India, China and South Africa) was a strong second at 400-500 tonnes. In the occident, gold demand was strong, but silver demand was even stronger. Global mints were reporting off-the-charts demand for silver bullion coins. Coin premiums were on the risein extremis at one point reaching almost $6 per ounce on the propular silver American Eagle. Now with warnings of the next leg of the financial crisis surfacing almost daily, that demand could accelerate

to an even higher lever. The massive, artificial wealth built-up in the world’s stock and bond markets will be looking for a place to go and one likely beneficiary will be the underpriced gold and silver markets. If premiums in the silver market are telling us anything, it is that the migration to precious metals has already begun, and that it is being led by Main Street.

Goldman says that “increased uncertainty about the fallout from weaker emerging market economies, lower commodity prices and potentially higher U.S. interest rates are raising fresh concerns about the sustainability of asset price rises, marking a new wave in the Global Financial Crisis.” The Guardian, a British newspaper, draws similar conclusions. The IMF’s recently released Global Stability Report, it says, “makes for a sobering read, saying sustainable recovery has failed to materialise and cheap money has led to bubbles and debt. The next financial crisis is coming, it’s a just a matter of time – and we haven’t finished fixing the flaws in the global system that were so brutally exposed by the last one.”

Editor’s Note: With reference to the chart above, this overlay, modeled on Goldman’s third wave thesis, shows the relationship between the Volatility Index (blue line) and the price of gold (green line). “The CBOE Volatility Index,” according to Investopedia, “shows the market’s expectation of 30-day volatility. It is constructed using the implied volatilities of a wide range of S&P 500 index options. This volatility is meant to be forward looking and is calculated from both calls and puts. The VIX is a widely used measure of market risk and is often referred to as the ‘investor fear gauge.'” As you can see, gold lags the Volatility Index which, as Investopedia points out, is forward looking. If Goldman’s analysis is correct, and we are early in the process, the recent breakout in the gold price could be a harbinger of things to come. Please note the recent surge in volatility index – the investor fear gauge. Gold’s inflation hedge characteristics are well-known, but what is not widely understood or publicized is gold’s practicality as a disinflation and deflation hedge – a characteristic prominently illustrated in the chart which covers a distinctly disinflationary period.

Instead of going long volatility, perhaps a simpler, more direct approach is called for:

“A recent IMF paper showed that gold was viewed by central banks as an asset that could be used to reduce risk. These results are consistent with a survey ANZ (Australia and New Zealand Banking Group) conducted with central banks and sovereign wealth fund managers in early 2014 which found that almost half of the respondents believed that gold was a safe haven asset over the long-term. Additionally, over 60% of respondents believed that gold would constitute a larger proportion of central bank reserves over the next two years, with just over 20% expecting a decline. Further, around half of the respondents thought holding more gold could mitigate portfolio risks, most of which were central bankers from ‘low-middle income’ countries.” – ANZ Research, “East to Eldorado: Asia and the Future of Gold”

Something happening in Shanghai

Quietly gold has started to register gains in the overnight Shanghai market. For a very long time, the overnight market (from a U.S. perspective) more or less followed along with the prevailing trend in London and New York. Over the past few weeks, the Shanghai market has taken on a life of its own with solid gains over the London and New York closes registered on a regular basis. In fact, as the chart below illustrates, a case could be made that much of the recent rise in the price of gold has occurred in the Hong Kong-Shanghai markets. These overnight price adjustments could foreshadow the gold market’s future. By this I do not mean to say that the direction is going to be exclusively to the upside. The real point is that China’s presence is going to be felt – up or down – and that presence is going to play significantly in the flow of real metal. The Shanghai Gold Exchange, as readers of this newsletter are already aware, is slated to launch its new fix by the end of 2015. In addition, the new London price setting regime already includes one Chinese bank with two others scheduled to join in the near future. As a result, China’s influence in the gold market, already a key factor, should increase markedly.

With its appetite for the physical metal now a well-established fact of life, China will likely serve as a foil to the current paper-based pricing regime. Chinese banks in London will be on the constant lookout for arbitrage opportunities that can be purchased and shipped to their home country. Meanwhile, the price posted in Shanghai will be for physical delivery only – no paper settlements or rollovers. In this new gold market, China, perhaps inadvertently, will act as a proxy for gold coin and bullion owners all over the world.

For deeper background and details on the London-Shanghai gold trade and what it might mean for the average gold owner, please see the following:

Will the Shanghai Fix ‘fix’ the gold market? China takes a seat at the gold pricing table Is helicopter money in our future?

“I certainly was not eager to bail out Wall Street,” Ben Bernanke reminisces, “and I had no reason to want to bailout Wall Street itself. But we did it because we knew that if the financial system collapsed, the economy would immediately follow.” With that Bernanke revealed the thinking behind the money printing extravaganza that followed thereafter – nearly $4 trillion added to the Fed’s balance sheet, billions in bailouts for Wall Street, and precious little for Main Street. Bernanke, in short, is saying that “the devil made me do it.” Now seven years later, we find ourselves no better off as a nation economically and staring a situation in the face that looks very much like the previous crisis, only this time with Wall Street likely to lead the slide into potential chaos, rather than the housing market.

More and more, investors and analysts alike are beginning to believe that another round of quantitative easing is in our collective futures and that, more than likely, is part of the psychology driving gold out of the doldrums. Some think that since quantitative easing had little impact the first time around, policy makers will try fiscal stimulus instead – infrastructure projects or even an outright universal helicopter money drop like manna from the heavens. That could become reality, but don’t rule out another helicopter drop on Wall Street for good measure. If you liked Ben Bernanke’s reaction to the economic crisis, you are going to love Janet Yellen’s. She wasn’t appointed by Barrack Obama because she had a problem letting the dogs loose if the situation warranted it.

We will end this short overview with a quote from billionaire hedge fund manager Paul Singer: “Although the levitation of financial assets has yet to levitate gold, we will grit our collective teeth on that score and await either ‘asset price justice’ or the ‘end times,’ whichever comes first.” Along with levitating gold, asset price justice is likely to lift silver as well. FYI – If you appreciate the kind of gold-based analysis you are now reading, you would probably find value in subscribing to News & Views and receiving regular issues and special reports promptly by e-mail. It comes free of charge and you can opt out of the service at anytime. Last, we will not deluge you with e-mails. Over 20,000 subscribe to this newsletter – one of the best and most widely read in the field. Never miss another issue. . . Please register here.

Michael J. Kosares is the founder of USAGOLD and the author of “The ABCs of Gold Investing – How To Protect and Build Your Wealth With Gold.” He has over forty years experience in the physical gold business. He is also the editor ofNews & Views, the firm’s newsletter which is offered free of charge and specializes in issues and opinion of importance to owners of gold coins and bullion. If you would like to register for an e-mail alert when the next issue is published, please visit this link.