The Soaring US Dollar! 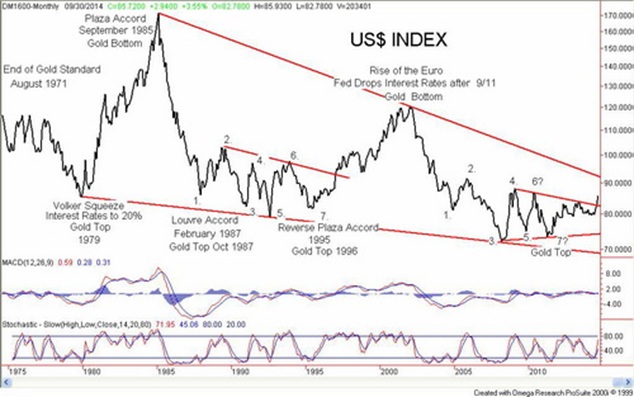 The current long bottom has been forming since 2004. Once again, the breakout appears to be occurring ten years later. The

potential objective is up to 104.75. There is potential significant resistance at 92 based on the long downtrend line from the 1985 top that aligns with the 2002 top.

If this is correct it has potential negative ramifications for the currencies that make up the US$ Index and for gold. Gold has tended to top or bottom inversely to tops or bottoms for the US$ Index. The Volker squeeze of pushing interest rates to 20% got underway in December 1979. Gold topped in January 1980 at around $850. The Plaza Accord was formed in September 1985 in order to combat the sharp rise in the US$. Gold bottomed in February 1985 near $280.

The next most important event for the US$ was the Louvre Accord in February 1987. The Louvre Accord’s goal was to stabilize international currency markets and halt the sharp decline of the US$ at the time. Gold topped in December 1987 at around $500. The Reverse Plaza Accord of 1995 was to bail out the Japanese economy that was under extreme pressure because of a huge rise in the Japanese Yen. Gold topped in February 1996 at about $418.

Gold made its major bottom in February 2001 which was about a year before the top seen in the US$ Index in January 2002. There was no particular accord at the time but the Euro came into existence in 1999 but it wasn’t until 2002 that notes and coins began to circulate. The rise in the Euro coincided with a long decline for the US$. Gold topped in September 2011 not long after the US$ Index made what thus far is its final bottom in February 2011 near 73.

So what is driving the US$ to new heights? Well it is not so much a strong US$ but a weak Euro. The EU economy is showing signs of falling into a recession even as the US economy appears to be holding with low growth. Japan is also falling once again into recession. There has been constant chatter of the US raising interest rates. That is not the case in the EU where there are now negative interest rates nor in Japan where interest rates remain at record lows. Longer-term interest rates in the US remain above those in both the EU and Japan. Tensions in Ukraine between Russia and Ukraine are negatively impacting the EU because of sanctions placed on Russia. Tensions in the South China and East China seas between Japan and China are negatively impacting Japan.

Is this the scenario often outlined by Goldman Sachs and others that gold is to collapse to $1,050? It is possible. The EU and Japan are entering an important deflationary cycle and the US$ has become the major recipient. The concern in a deflationary cycle is insolvency. While US Treasuries have been the major beneficiary of the rush into US$ it is noteworthy that weaker credits are actually falling in value even as US Treasuries rise in value. There are numerous concerns of insolvency in the Euro zone and in Japan. Sanctions against Russia are triggering trade wars. As everyone supposedly learned during the Great Depression trade wars are a lose-lose situation. Maybe they didn’t really learn anything.

Debt is fine as long as it can be serviced. But the debt levels in the western economies has reached potentially catastrophic proportions. The US has a total debt to GDP ratio of about 350%. Officially reported US debt levels according the Federal Reserve Board is about $58 trillion against a GDP of $16.6 trillion. The US also has unfunded liabilities of about $116 trillion. Japan’s total debt to GDP is around 650%, the Euro zone is at 450% as is Great Britain. For all OECD countries, the total is north of 400%. Back in 1990, total debt to GDP for the OECD countries was generally no higher than 200%. It is with the debt where the seeds of the next collapse lie especially given low savings rates in most of the OECD countries.

While the US$ appears to be rallying now it could set up the next US$ collapse. The US$ is under attack from both China and Russia in particular. Gold is cheap right now but everyone is reminded that during the deflationary 1930’s gold rose both officially when FDR raised the price of gold in 1933 and gold stocks rose over 400% even as the Dow Jones Industrials (DJI) was losing almost 90%. Gold is driven by fear. Fear of monetary collapse. Right now it is the US$ that is benefitting but when the US$ turns as it has in the past in 1985 and 2002 gold prices rose sharply. The previous sharp rises for the US$ played out over five/six years. This time the cycle is liable to be considerably shorter given the growing pressure on the US$ from the sanctions against Russia.

The current rise in the US$ has been almost straight up with little or no correction. A violent up move could be met with a violent correction and possibly soon. How gold responds during that correction should be watched carefully.

CHART OF THE WEEK

Charts and commentary by David Chapman