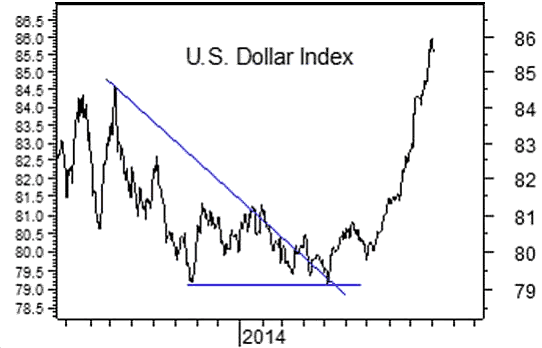 The dollar is on a tear. And the world is scrambling to figure out what it means. Beginning with the always-interesting Martin Armstrong in a recent Financial Sense interview:

“I know a lot of people that hate the dollar, but you have to understand the dollar is really only the game in town. Yes, we have a big debt but that debt is absorbed by central banks just having to hold reserves. They’re holding it in U.S. government debt. You can’t hold debt of Greece. Debt of Germany just went negative…France is in trouble as well as Spain and Italy…

So, this is the trend as war develops more in the Middle East and also in Europe and Asia. Capital has no place to go but the United States and this is going to push the U.S. dollar up higher…”

A rising U.S. Dollar has benefits, including higher demand for U.S. Treasuries, lower borrowing costs for the Federal government, foreign demand for U.S. assets (including stocks), lower commodity prices, and especially lower oil prices, which will hurt Russia and benefit the U.S consumer by lowering the cost of gasoline.

Overall, until any negative effects begin to manifest, a stronger Dollar suggests money will continue to be attracted to the U.S. stock market, especially stocks whose sales are primarily domestic, and not international, and particularly for large-cap stocks. This has already begun; larger companies have been outperforming small- and mid-cap companies since early summer. Investors should focus on large U.S. companies that do not get a major share of their profits from abroad. Stocks of companies that sell globally will see their foreign earnings somewhat diminished by a lower value of their foreign currency sales in U.S. dollar terms.

Caroline Valetkevitch at Reuters takes the other side, pointing out that some of those negative effects are already manifesting:

Surging dollar may be triple whammy for U.S. earnings

The suddenly unstoppable U.S. dollar is posing a triple threat to American companies’ profits: driving up the costs of doing business overseas, suppressing the value of non-U.S. sales and, perhaps most worryingly, signaling weak international demand.

The dollar has been on a tear, with an index tracking it against six other major currencies notching roughly an 8 percent gain since the end of June. Few analysts see its breakout performance stalling out anytime soon since the U.S. economy stands on much firmer footing than most others around the world, Europe’s in particular.

For companies in the benchmark S&P 500, that’s a big headwind because so many are multinationals, and as a group they derive almost half of their revenue from international markets.

“You will get some companies that have failed to meet expectations based on the weakness we’re seeing overseas, so it is going to be a source of disappointment,” said Carmine Grigoli, chief investment strategist at Mizuho Securities in New York. Moreover, that weakness, especially in Europe, “is going to be critical here,” he said. “It’s an important component of (U.S.) earnings going forward.”

And while investors and analysts have begun to figure in the negative effects of a fast-strengthening dollar with regard to the approaching third-quarter reporting period, the risk to the fourth quarter and 2015 remains largely unaccounted for.

For instance, third-quarter profit-growth expectations for S&P 500 companies have fallen back to 6.4 percent from about 11 percent two months ago, Thomson Reuters data showed. By contrast, the fourth-quarter growth forecast is down just slightly, to 11.1 percent from a July 1 forecast of 12.0 percent. And profit-growth estimates for 2015 have actually increased in that time from 11.5 percent to 12.4 percent.

“If you try and extrapolate out to the fourth quarter and how much that currency effect is going to be, your guidance is probably going to come down for a good slug of the multinationals on the S&P,” said Art Hogan, chief market strategist at Wunderlich Securities in New York.

Ford Motor Co.’s disappointing forecast this week may be a hint of what’s to come. The No. 2 U.S. automaker cut its forecasts for pretax profit this year, citing steeper losses in Russia and South America. “Not to extrapolate too broadly from one company, but I think the negative sentiment . . .has been pretty dramatic,” said Michael James, managing director of equity trading at Wedbush Securities in Los Angeles. Ford shares lost 10.7 percent last week.

The onslaught of quarterly results begins soon, and the next two weeks bring reports from U.S. companies with some of the highest levels of overseas sales. Among them, fast-food restaurant operator Yum Brands, which derives roughly 77 percent of its sales overseas, is due to report on Tuesday, while results from chipmaker Intel, with about 83 percent of its sales coming from overseas, are due on Oct. 14.

Finally, Automatic Earth’s Raúl Ilargi Meijer goes downright apocalyptic in his recent The US Dollar Is About To Inflict Carnage All Around The Planet, where he quotes some representative reports:

“The weakening yen is starting to squeeze Japanese consumers as prices rise for everything from Burgundy wine to instant noodles, threatening Prime Minister Shinzo Abe’s plans to revive the country’s economy. The currency slid to 110 yen to the dollar yesterday, the lowest level in six years, making imported goods and materials more expensive. Though inflation is one of Abe’s monetary goals, the yen’s sharp slide undermines steps to boost consumer spending and endangers public backing for his economic program…. Japan’s GDP shrank an annualized 7.1% in the April-to-June period, the most since the first quarter of 2009.”

“The yen’s slide to a six-year low is amplifying a rout in emerging-market stocks as investors shift their focus to Japanese companies with earnings in dollars, according to Morgan Stanley. The MSCI Emerging Market Index tumbled 7.6% in September, the most since May 2012, led by China and Hong Kong. That compares with a 3.8% drop for the Topix Index in the period. The yen depreciated 5.1% versus the dollar to the weakest level since August 2008 last month, while a gauge tracking developing-nation currencies retreated 3.8%.

Net inflows to U.S. exchange-traded funds that invest in emerging-markets tumbled 82% to $977.9 million in September, led by a 90% decline to China and Hong Kong, data compiled by Bloomberg show.”

“After ticking just above 110.00, USDJPY has been a one-way street lower and that means only one thing… Japanese stocks are cratering. From Friday’s highs, The Nikkei 225 has crashed over 1000 points (despite Abe’s promises yet again of more pension reform buying of stocks). Of note, perhaps, is that, Japanese investors bought a net $3.6 billion of foreign stocks last week – the most since January 2009 – perfectly top-ticking global equities… Well played Mrs. Watanabe.”

“Inflation expectations in the US have just followed the eurozone by plunging lower. Until very recently, the Fed and the ECB had been quite successful at keeping inflation expectations in their normal range – this despite their clear failure to control actual inflation itself, which has consistently undershot expectations. Investors are beginning to realise that contrary to their confident actions and assurances, the Fed and the ECB have failed to prevent a dreaded replay of Japan’s deflationary template a decade earlier in the West.”

Meijer’s conclusion: “It’s going to be carnage out there.”

There are clearly benefits to a strong currency. And in recent years a lot of very smart people have made favorable foreign exchange trends a centerpiece of their analysis, generally citing a strong currency as an investment positive. But there seems to be a missing piece to that scenario, which is debt.

True, other things being equal a strong currency is a sign of (relative) confidence and generally a good thing for a country that has its financial house in order. Appreciating money makes its citizens’ savings more valuable and its corporations better able to snap up cheap acquisitions abroad. On balance, the strong currency society gets richer.

But for an over-indebted country, where local savings are dwarfed by local debt, a strong currency makes the debt burden even heavier, so the net effect is negative. For a real-world test of this thesis, simply look at who had the last batch of strong currencies. Between 2009 and 2013 that would be Japan and Europe, which are now tipping into recessions that threaten to become something much worse.

Which is why the dollar is soaring. Europe and Japan — along with nearly-as-over-indebted China — need weaker currencies not to thrive, but survive. US policymakers, while recognizing the downsides of a soaring dollar, no doubt see taking one for the team (i.e., the global economy) as better than a list of alternatives that includes widespread Depression.

Now the question is whether the strong dollar will do to the US what the strong yen and euro did to Japan and Europe. That is, will America in 2015 be an island of stability in a sea of chaos or will it be a yet another deflationary basket case?