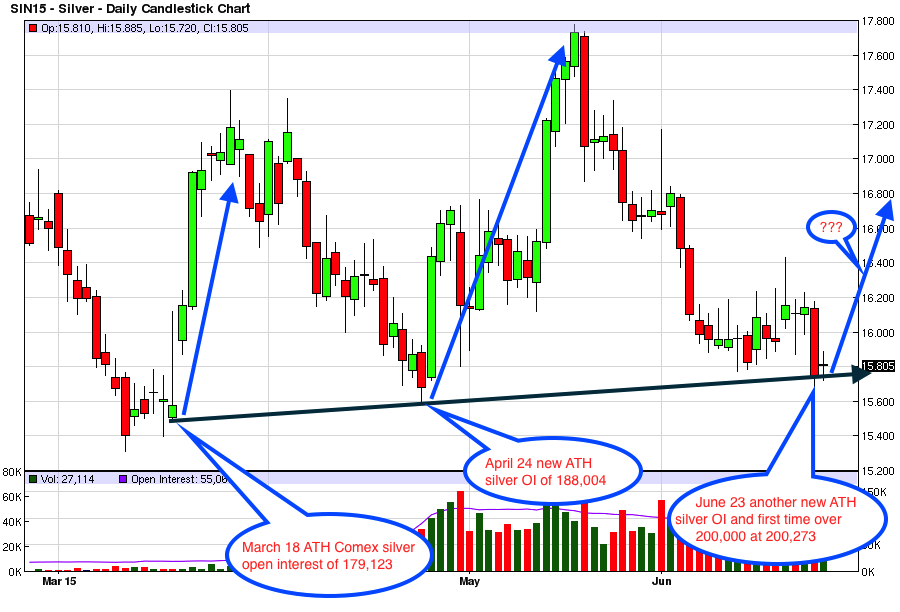 For the first time ever, total Comex silver open interest exceeded 200M contracts yesterday, settling at 200,273. This means that the coming Spec short squeeze is going to be violent and substantial. And why isn’t anyone calling this a “bubble”?

The final open interest numbers for yesterday are in and they are truly remarkable. Gold, which declined by $7, saw its OI rise by over 11,000 contracts to 430,978. This is the highest Comex gold OI since late March. Since yesterday was a CoT survey day, there’s no doubt in my mind that this week’s report will show another substantial and bullish improvement in the gold CoT structure. Why? For the Wed-Tue “CoT week”, gold was down $5 but total Comex OI ROSE by over 15,000 contracts with 2/3 of the rise coming Fri-Tue when price was declining by over $25. That’s A LOT of fresh Spec shorting in gold and it will likely move the gold CoT to a bullish structure not seen since the early November lows last year.

That’s all well and good but, obviously, the point of this post is silver so let’s get right to it…

From a CoT standpoint, this is all extraordinarily bullish for paper silver. As mentioned earlier, the next report is due Friday and it will be based upon these numbers from last evening. For the CoT week, silver was down 21¢. Remarkably, over this same period, total silver OI spiked by 9,500 contracts from 191,774 to yesterday’s 200,273. From a CoT perspective, we are back to a very bullish extreme in silver, too.

And what about the short squeeze that we’ve been expecting. OH, IT’S DEFINITELY COMING and the growth of Spec short open interest this week only adds more fuel for the fire. All we need is a spark. We almost had that spark last week after the Fedlines but silver failed to cross its 50-day moving average and fell back. The “doubling-down” on Spec short positions this week is simply accelerant for the fire once it begins. The chart below can’t make it much more clear for everyone: In other news today, the Greek situation is reaching a true crisis point and the US economy is slipping into recession. Meh,

whatever. The HFT algos don’t give a damn about such arcane notions as fundamentals, all they see is a declining yen and they sell “gold” accordingly: In the 3.5 years since MFingGlobal when I officially quit trading, rarely have I been so tempted to wander full force into The Casino. This current situation is so extreme and the “short bubble” so HUGE that it is very difficult for me to remain on the sidelines. However, on the sidelines I shall remain. This personal restriction does not apply to you, however, my dear reader. Best of luck, be patient and prepare accordingly.