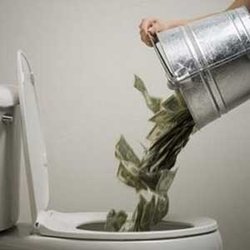 One of the traditional signs of market tops is individual investors finally succumbing to the lure of apparently easy money and pouring their savings into the stock market. In the past this dumb money flowed into equity mutual funds in general. But today it’s favoring exchange traded funds (ETFs) that, rather than trying to pick winners, simply offer exposure to sectors or broad market indexes.

ETFs Race to Fastest Yearly Start Ever Based on Inflows

(Wall Street Journal) – Investors poured $62.9 billion into exchange-traded funds in February, pushing the year-to-date world-wide tally to $124 billion, the fastest start of any year in the history of the ETF industry, according to data from BlackRock Inc.

U.S. ETFs accounted for $44 billion of that, pushing assets in U.S. funds to almost $2.8 trillion.

Most of the money went to cheap, index-tracking ETFs, a sign that the price war in ETFs isn’t over yet. BlackRock’s iShares ETFs were the biggest winner, and its low-cost Core series garnered the bulk of the $38 billion global haul.
“All of the money is going into the cheapest and most boring ETFs. This is the retail investor getting back into the market with a vengeance,” said Dave Nadig, chief executive of ETF.com, an industry website owned by Bats Global Markets, newly a subsidiary of CBOE Holdings Inc.

The Rise of the ‘Do-Nothing’ Investor
Passive mutual funds are growing rapidly, pushing aside stock pickers and changing the investment world. Click here to read more about The Wall Street Journal series.

The fastest-growing ETF so far this year is the iShares Core Emerging Markets ETF, which took in $4.2 billion in the first two months of the year, 18% of its assets, according to FactSet. Three other Core ETFs that invest in U.S. stocks were also among the top gainers last month.

Why is this a sign of a market top? Because small investors tend to trade on emotion rather than logic or expertise.

It takes them a long time to forget the pain of the last bear market, so they avoid the early stages of recoveries. When they finally conclude that there’s money to be made, it’s usually too late.

And why are individual investors only the second dumbest money? Because governments are even less astute and more emotional than individuals, and their plunge into equities is just beginning. Japan’s central bank is now one of its market’s biggest “investors” while the Swiss National Bank is a huge holder of blue chips like Apple and Microsoft. See We’re All Hedge Funds Now, Part 4: Central Banks Become World’s Biggest Stock Speculators.

In the next downturn — which, based on most valuation measures, seems imminent – the US Fed and European Central Bank will find that interest rates are too low for big further cuts while the supply of bonds is insufficient for big new QE programs. So they’ll join Japan and Switzerland in buying stocks. They’ll do so indiscriminately, creating their own index ETFs and throwing money at a broad range of large cap stocks, possibly pushing prices to levels that history would consider insane. In other words they’ll act like retail investors on steroids.

But that’s a story for the next cycle. This time around the fact that individuals pouring in is all we need to know.