The “Most Important Chart In The World” 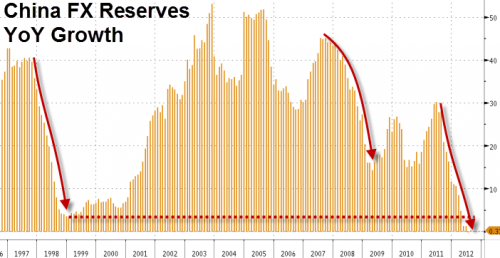 Hopes for an early recovery in the global economy may be overoptimistic, according to CLSA’s Russel Napier, as he notes the expansion of China’s reserves, which has been an engine of global economic growth, is about to come to a shuddering halt. As eFinancial News notes, Chinese reserves have decelerated dramatically over the last five years and are now close to zero. Napier said of the graph: “It is the most important chart in the world. The growth in Chinese reserves has determined all the key developments in financial markets in the last two decades. It printed lots of currency and artificially depressed the US yield curve. It has been the cornerstone of global growth, and now it’s over.” The last time the Chinese reserve growth rate was below 10% was at the end of the 1990s, just before the bursting of the technology stock market bubble and a recession. The recovery in the growth rate from 2001 onwards was followed by the economic boom of the last decade. The growth rate turned down decisively in 2007, just before the onset of the financial crisis.

China’s reserves have come from a trading surplus, and the Chinese authorities have used the money to buy US Treasury bonds. The finance that China supplied to the US helped fuel economic growth in that country and the rest of the world.

Ed Note: Perhaps that is why Marc Faber has this to say:

Marc Faber : “They should buy themselves a machine gun…I need to buy a tank. Joking aside, look, we have manipulated markets. Whenever you manipulate markets, you will get unintended consequences. i think the reelection is unintended consequence of money printing, that favors the so- called 0.25%. It was easy for the Democrats to attack the wealthy fat cats of Wall Street, the elite, and the privileged people to portray them as a profiteer of the system, which to some extent, they are. Not because they wanted to but because Mr. Bernanke enabled them to be profiteers. We have a situation where you have today Mr. Obama, I doubt he will stay at the presidency for another four years. I think there will be so many scandals, but that’s another story.” – in Bloomberg
or this:

There will be Pain , very substantial Pain

Marc Faber : “There will be pain and there will be very substantial pain. The question is do we take less pain now through austerity or risk a complete collapse of society in five to 10 years’ time?”
“In the Western world, including Japan, the problem we have is one of too much debt and that debt now will have to be somewhere, somehow repaid or it will slow down economic growth,” stated Faber. “I think we lived beyond our means from 1980 to 2007, and now it’s payback period.” – in CNBC