The Problem With Rosy Economic Forecasts 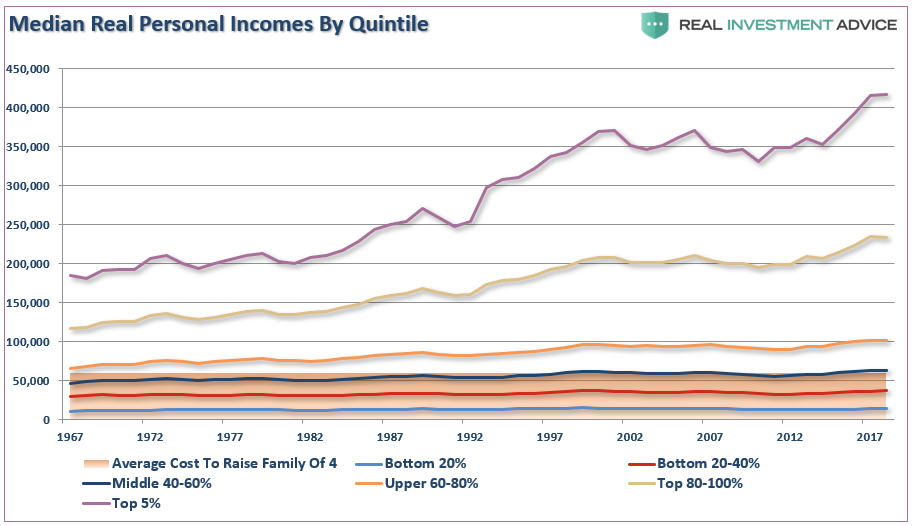 “I have little doubt that with excess savings, new stimulus, huge deficit spending, more QE, a new potential infrastructure bill, a successful vaccine, and euphoria around the end of the pandemic, the U.S. economy will likely boom. This boom could easily run into 2023 because all the spending could extend well into 2023.” – Jamie Dimon, CEO JP Morgan Chase

There are many problems with this view looking forward.

To begin with, the vast majority of American’s do not have excess savings. If they did, then repeated stimulus payments wouldn’t be needed to support economic growth. The reality is “savings” get skewed by the top 20% of income earners, notably the 0.01% like Jamie Dimon.

The top 5%, of income earners skew the measure. Those in the top 20% have seen substantially larger median wage growth versus the bottom 80%. (Note: all data used below is from the Census Bureau and the IRS.)”

Since the top income earners have more than enough income to maintain their living standards, the balance falls into savings. This disparity in incomes generates the “skew” to the savings rate and obfuscates the ability to “maintain a certain standard of living.”

More Stimulus Not The Answer

Such remains problematic for many Americans and consistently forces them further into debt.

“The debt surge is partly by design. A byproduct of low borrowing costs the Federal Reserve engineered after the financial crisis to get the economy moving. It has reshaped both borrowers and lenders. Consumers increasingly need it. Companies increasingly can’t sell their goods without it. And the economy, which counts on consumer spending for more than two-thirds of GDP, would struggle without a plentiful supply of credit.” – WSJ

I often show the “gap” between the “standard of living” and real disposable incomes. In 1990, incomes alone were no longer able to meet the standard of living. Therefore, consumers turned to debt to fill the “gap.”… CLICK for the complete article