The Price of Uranium Is About to Rocket 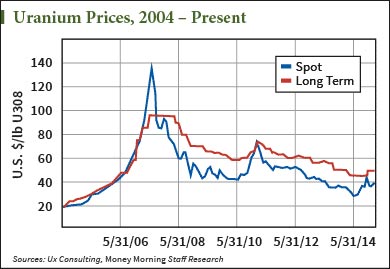 While oil and coal may be struggling, that’s not the case all across the energy sector.

Right now, the world’s two most populous nations are forging ahead with one specific form of power: uranium.

For many, it’s a forgotten or overlooked sector of the energy market, especially in the wake of Japan’s Fukushima disaster. But given the burgeoning demand for, and limited supply of, this crucial component of the energy mix, it’s time for a closer look at uranium. And one recent major deal is drawing serious attention… for good reason.

In mid-April Indian Prime Minister Narendra Modi paid a visit to Canada. While there, he signed a five-year 3,000 tonne deal to buy uranium in order to power his country’s nuclear reactors. It’s an agreement worth C$350 million dollars. Why is this significant? Narendra’s meeting was the first India-Canada governmental visit in 42 years. But more importantly, it was the first nuclear contract between these two nations in four decades.

And it may just be a foreshadowing of what’s to come.

Despite the terrible Japanese Fukushima disaster, globally there are hundreds of new reactors either under construction or in planning stages.

China, too, only produces about 4 million pounds annually, while on track to build the most nuclear power capacity, nearly tripling by 2020, in an anxious bid to alleviate problems with air pollution. For its part, India’s in the midst of a major build out of nuclear power generation as well. The country’s installed capacity is now at 5,780 megawatts, but that’s set to nearly double in just the next four short years to 10,080 megawatts.

Why Prices Dropped and How We’ll Catch the Rebound

After Fukushima, uranium prices lost about 60%. But the four-year cyclical bear appears to have run its course.

As illustrated in the chart below, since bottoming near $28 in mid-2014, spot uranium prices have already gained nearly 40% to reach their current level around $38.50. It’s now looking increasingly like last summer’s $28 low is the bottom for the current cycle. As I explained above, the developing world is not only committed to nuclear, but aggressively expanding its share of the power generation mix. And that’s going to demand a lot of uranium.

Worldwide annual consumption is forecast to leap from 155 million pounds to about 230 million pounds within nine years. India’s agreement is a wise step to secure the required fuel – roughly 7 million pounds of uranium concentrate into 2020.

Keep in mind that uranium provides clean, base load power at low cost to billions of people. And at current spot prices, many producers can’t turn a profit.

The implication here is higher prices are inevitable as demand starts to overwhelm supply before too long. There’s still time to get in, and help your portfolio go nuclear.