The Powerful Case for Silver 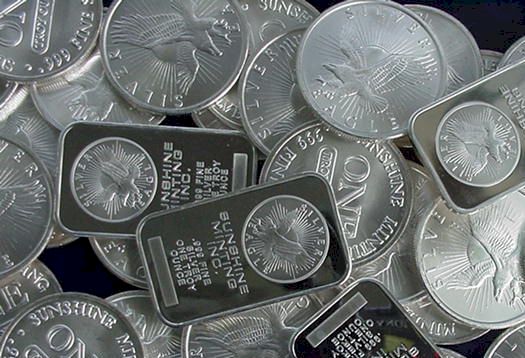 The Powerful Case for Silver

I am a well-known “gold bug” because of my strongly voiced opinion that gold has been one of the best assets for protecting yourself from the US dollar’s prolonged decline.

Lately, the precious metals have taken a beating, and I’ve been called to defend gold’s future prospects in the media countless times. While I am confident that gold will rebound with a vengeance before long, I think investors are potentially missing an even greater opportunity in that other monetary metal: silver.

To address this oversight, I have compiled a special report called The Powerful Case for Silver, which is available at www.schiffsilver.com. This 14-page report report contains in-depth analysis of what I believe to be the strongest arguments for owning the white metal. What follows is a general overview of the key arguments I make in the report.

After a couple generations of purely fiat currency in the United States, a lot of people have forgotten that money used to be backed by something of value – gold and silver. It wasn’t until 1965 that the US stopped making its dimes and quarters out of 90% silver, and the dollar was backed by gold internationally until 1971.

In spite of fiat money’s ubiquity, more and more people around the world are waking up to the dangers of paper currency and turning to gold and silver to protect their savings. Silver is particularly useful to everyday citizens around the world because of its smaller value-to-weight. A half-ounce of silver can buy you dinner. A half-ounce of gold can buy dinner for you and 60 of your closest friends. That’s why for centuries, gold has been considered the money of kings, while silver is known as the people’s money.

It’s not hard to see the growing importance of a stable medium of exchange worldwide – look to the Cypriot banking crisis or the barter markets evolving spontaneously in economically devastated countries like Argentina or Greece. Here are places where having an stash of silver versus a roll of banknotes can mean the difference between keeping your family well-fed and having to beg for assistance.

Developed nations are also waking up to this reality, translating into record silver sales at the US Mint and other major bullion producers despite the recent correction in global spot prices. This investment demand is providing a baseline of support to silver’s price and helping to re-establish silver as a universally recognized form of money.

Silver conducts heat and electricity better than any other metal on Earth. It is also anti-bacterial. These amazing properties make silver indispensable in a vast array of modern industrial and technological applications.

This industrial demand has been shifting dramatically since the turn of the century, as defunct applications for silver like photographic film have been replaced by new technologies like photovoltaic power. The evolution of silver’s industrial applications continues unabated, with new uses being developed every year.

In spite of a recent dip in demand for industrial silver due to global economic volatility, the fundamentals of the industries consuming silver look promising. The Powerful Case for Silver delves deeper into the latest silver technologies like nanosilver and demonstrates why I believe industry will provide growing demand for silver over time.

For the majority of human history, the prices of silver and gold have been closely tied to each other. There is estimated to be about 19 times as much silver as gold in the earth, and only 11.2 times more silver than gold has ever been mined. Today, the silver:gold price ratio on the markets is about 65:1. That is out of sync with the relative scarcity of the metals and with the long-standing historic bounds from 12:1 to 16:1.

To understand why silver is being undervalued by the market, it is important to trace the histories of the two precious metals. Over the last two centuries, as world markets were forcibly detached from their monetary backing, clumsy attempts at setting fixed exchange ratios at first cleared and then flooded Western markets with silver. Then, with both metals taken out of circulation, precious metals investment was confined to saving – a role more suited to gold.

As the fiat currency system collapses around us, I expect the precious metals to return to circulation, and silver to once again be valued for its advantages in this role. Though I expect both metals to appreciate significantly, silver may rise much faster in order to realign with its historical price ratio to gold.

Take The Time to Understand Your Investment

I’ve just brushed the surface of The Powerful Case for Silver. Inside the report, you’ll find more detail on all of these points, accompanied by helpful charts and graphs illustrating silver’s future prospects.

The Powerful Case for Silver also provides advice on which silver products are investment-grade and how to go about purchasing them safely.

For those who have been on the fence during this bull market, the recent correction is an excellent opportunity to learn about silver and build a position.

Click here to download The Powerful Case for Silver, a free in-depth report on the state of the silver market right now and investment prospects for the precious metal in the future.