The Periodic Table of Commodity Returns 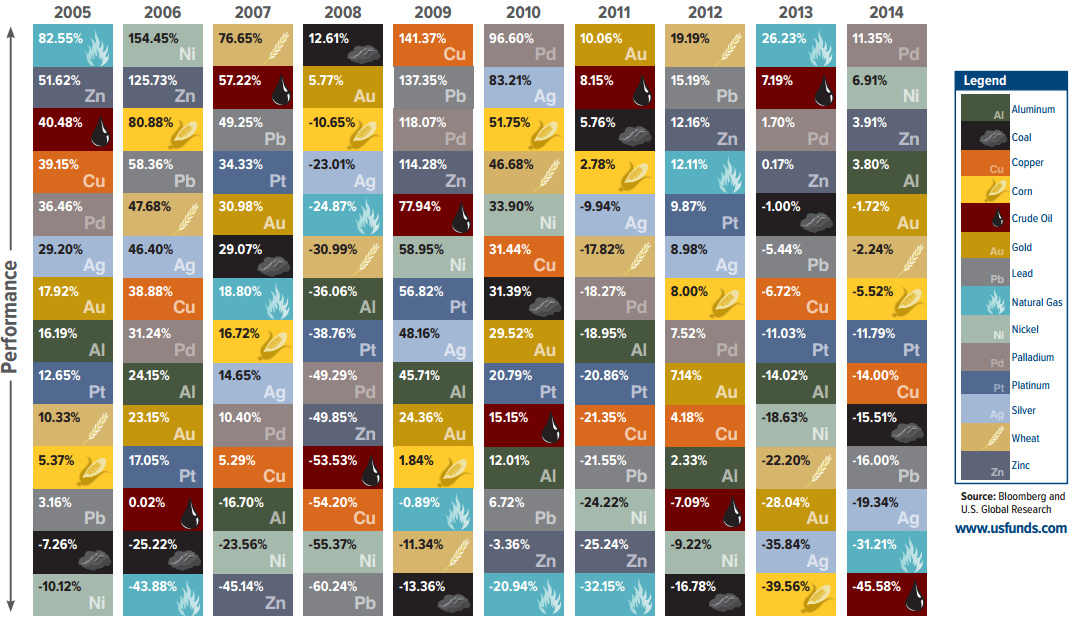 Every year the good folks at US Global Investors put together this simple and fantastic visualization on the annual returns for all commodities.

Frank Holmes, their CEO and Chief Investment Officer, has an in-depth post about it here on LinkedIn.

However, here is our quick summary of things we found interesting:

First, the two worst performers in 2014 were the two best performers the previous year: oil and natural gas. This speaks to the short-term volatility of commodities, as well to the fact that investors need to be looking to the long term. While something may swing up and down in a short time horizon, in the long term it may prove to fulfill the investment thesis based on supply and demand fundamentals.

Second, despite the sentiment for gold, it was actually the second best performing currency in the world in 2014. It was down -1.7% relative to the US Dollar, but denominated in other currencies it did quite well. In a year where many currencies (Russian Ruble, Argentine Peso, Swedish Krona, Japanese Yen, Euro, etc.) had double digit declines, this is very notable. Also, as we have learned from the recent unpegging of the Swiss Franc to the Euro, we have seen that even stalwart safe havens can be tampered with.

Last, as it has been noted by several pundits, silver got crushed in a year where gold did relatively well. Silver is much more volatile than gold and typically swings with it in the same direction, except with more velocity. This was untrue for 2014, but it could be an interesting thing to watch in 2015.

We would not be surprised to see silver gaining ground on gold to bring the gold/silver ratio to a more historically normal level.