The Oracle Speaks … and Here’s What We Learned 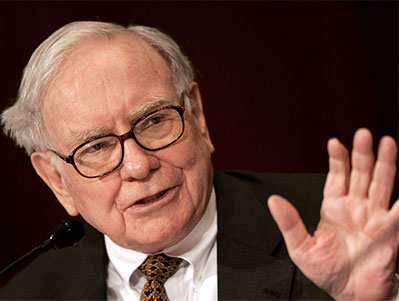 He’s the best investor in the world.

I know that may seem like just an opinion. But is it really an opinion given the remarkable — and unrivaled — track record of the Omaha of Oracle … the one-and-only Warren Buffett?

Now, I do have a few issues with Mr. Buffett. Some are with his politics and others with his investment strategy. Yet I’m also largely in agreement with him, particularly when it comes to his focus on buying good businesses cheap.

I also have intense respect for Buffett’s no-nonsense approach to buying companies he knows and understands … and avoiding those he doesn’t.

This approach has worked for his Berkshire Hathaway (BRK-B) shareholders over the years, and particularly recently.

BRK-B is up more than 100% in the last five years. Yet, Buffett missed out on a lot of big winners over that time.

Amazon.com (AMZN) is one name that comes to my mind, and certainly to his. Yet he’s more than made up for it by his numerous great calls across the markets for many, many years.

Over the weekend, the annual Berkshire Hathaway shareholder meeting took place, an event sometimes described as the “Woodstock for Capitalists.”

This event always generates a lot of press, and this year’s event was no exception. Here are a few of what I think are the most-interesting takeaways from Berkshire meeting.

In an interview with CNBC host Becky Quick, Buffett made what I thought was a very interesting observation about buying good companies at a high price.

Quick asked Buffett about a statement he made about his See’s Candies acquisition.

Buffett had said previously that if the seller would have tried to get another $5 million from him, he would have said no. And that this would have been a mistake.

“Are you still that cheap?” asked Quick.

“No, I’m not as cheap. Because that taught me something. I’m still cheap. But not as cheap as I used to be.”

Buffett then added the following words of wisdom to the discussion:

“I mean, it’s just not given to man to be able to foresee 20 years out on most businesses. On the other hand, if you pay big prices for something, you’re counting on earnings. You’re counting on being right a very high percentage of the time on projections of earnings that go up … “

A few things about this statement intrigued me.

First, Buffett acknowledges that it’s sometimes OK to pay (slightly) more for what you think is a good business.

I never like to pay too much for a good business (i.e., a good stock). But if metrics like great free cash flow show the business is really good, it may at times be OK to buy that stock despite a high valuation.

Then Buffett acknowledged how difficult it is to prognosticate into the future about any business. He said this ability is “just not given to man.”

This acknowledgement — that the future is supremely unknowable — is something I don’t think Buffett gets enough credit for.

People would rather ascribe to him some kind of investing superpowers. They would be better-served to instead acknowledge the consistent, principled and humility-infused approach he comes to the market with each day.

Finally, Buffett warns that if you pay too big a price for something, you are always going to need bigger and bigger earnings to keep those prices up.

Well, that’s a difficult thing to do for any business, no matter how sound it may be.

It’s also tough to do in the aggregate.

So, when I think of the post-election rally … and how it’s been built largely on hope of pro-growth policies being passed in Washington … I get worried.

At some point, real earnings and real economic growth are going to have to match those lofty expectations. Otherwise, stocks won’t be able to trade materially higher from here.

Knowledge of that outcome is not given to man, either …

But my suspicion is that disappointment on this front is a lot likelier than the flipside of that coin.

The markets seemingly breathed a sigh of relief after Emmanuel Macron won the French presidential election by a 20%-plus margin. The euro briefly climbed to a six-month high vs. the greenback before traders took some profits off the table.

Here in the U.S., stocks mostly clung to the flat line during Monday’s session. Meanwhile, volatility fell 8% to a 24-year low and gold came off its worst weekly decline since October. Bullion gained 0.2 points to end at $1,227 per troy ounce.

• Coach (COH) bagged Kate Spade (KATE) for $2.4B: The deal, which sent COH shares up nearly 5% and KATE up 8.3%, sparked speculation that Jimmy Choo may be a shoe-in as Coach’s next takeover target. Coach might also add Burberry’s plaid to its luxury-accessory lineup, according to reports.