The oil currency—Norwegian Krone; is it undervalued? Hmmm… 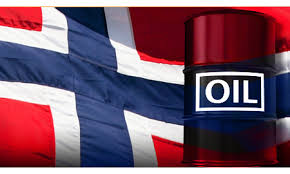 “I saw a report yesterday. There’s so much oil, all over the world, they don’t know where to dump it. And Saudi Arabia says, ‘Oh, there’s too much oil.’ They – they came back yesterday. Did you see the report? They want to reduce oil production. Do you think they’re our friends? They’re not our friends.”

The oil currency—Norwegian Krone; is it undervalued?  Hmmm… The krone is an oil currency.  The currency tends to track very closely with the price of oil over time.  It makes sense given Norway’s dependence on oil as an economic driver.   But lately, we have seen a divergence in the two prices—oil and Krone/USD, as you can see clearly in the chart below:

Another way of looking at this Krone versus oil relationship over the longer term is by look at the ratio (calculated by dividing NOKUSD by WTI oil futures price).  As you can see below, this ratio is anything but stable over the longer term [the ratio would be an interesting play in its own right]. The decline in the ratio is telling us oil has become relatively more expensive when priced in NOK/USD.

I am not sure what these charts are telling us.  But it’s likely they are telling us different things depending on the time frame we choose.  Near-term it seems the divergence in the first chart above presents a trading opportunity; longer term if one believes the US dollar will continue to rally over the next couple of years, and oil prices at least remain stable, the NOKUSD – Oil ratio could go a lot lower.

If we keep our focus over near-term time frame; here are three thoughts or considerations:

1)      NOK/USD is telling us the oil move is limited: i.e. crude prices have spiked on OPEC deal sentiment (though adherence to said agreement is still suspect); but global supply data still suggest there is a lot of oil out there; indicating a $50 oil price may not be sustainable given still suspect global demand.  I am not just thinking about all those tankers filled with crude parked offshore, I am thinking about a vast new supply coming on stream should a President Trump unleash the US domestic oil and gas industry.

2)      The krone is considerably undervalued relative to oil: Given the huge run we have seen in the US dollar lately, maybe this move in the Krone is a near-term anomaly only—and the divergence displayed in the chart on page 1 above is about to be closed (thus this is all about the US dollar and not oil).

3)      Even if it’s all about the US dollar; a window will open for the swift: Though I keep touting this idea, which increasingly is becoming suspect to reality, even in bull markets there is usually time made for a correction in price.  If the beginning of a dollar correction can be identified, and granted I have done a lousy job of doing that so far proving it is dangerous to fade a trend, the krone may be a screaming buy against the US dollar.  This will be especially true if oil rallies on a weaker US dollar (something that used to happen during the last cycle day after day).

But no matter what we say now or how we view these charts, the longer term will likely be defined by the Trump agenda, and even if we know the agenda, it only gets us part way there.  I say that because there is the usual tug-of-war in play here (consider it the natural feed-back loop so common in market prices).

Should President-elect Trump be able to get his policies through congress, it does setup the potential for a virtuous circle of global capital flow into the US (as I discussed on the most recent Currency Currents (12/3/16) posted at our blog); potentially driving the US dollar higher for years to come.  Same token, Trump’s policies, as indicated, could unleash a huge amount of energy supply onto the market. The question then becomes:  Will the expected economic growth from Trump-ism create enough demand to soak up all the increased supply of oil?

Once again, unless we are visited by Mr. Market Hindsight anytime soon, none of this will be easy to sort out ahead of time.  That said, at least over a speculator’s normal time frame, the Norwegian Krone could be setting up for a great trade.  Stay tuned.

Have a great week.