The Next Mining Crash: What to Do … 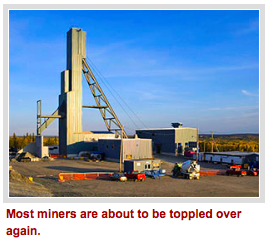 I hope you followed my suggestions in last week’s column concerning gold and silver. If you did, you should be sitting pretty. Gold has plunged as much as $42.70, or 3.2 percent in just a week.

Silver, platinum and palladium are also getting hit, just as I warned, with more losses to come.

But that should be music to your ears. Why?

It’s just one of those things that most investors never understand, mentally or emotionally.

And it’s one of those things that even most traders don’t figure out, because most of them don’t have the necessary experience especially with their own money on the line.

To me, a trader is not a trader unless they have had at least 15 years’ experience with their own money on the line. Anything short of that is a rookie.

But that’s beside the point for today.  There is more carnage coming in the precious metals — and it’s already causing the next crash in the mining sector. Yes, you heard that right. With very rare exceptions, most miners are about to be toppled over again. They’re likely to give up as much as 100% of their recent gains, if not more.

But also keep in mind what I said last week and in other published works: It is never the first move up that determines whether or not you are looking at a real bull market.

Instead, what is almost always the all-determining factor is the first pullback.

Price fluctuates, all the time. Thing is, most analysts, investors and traders do not have the patience, objectivity, or experience to analyze price — the language of the market — no less the timing element …

Am I tooting my own horn? I guess I am, in a way, and pardon me for doing so. But I am sick and tired of all the inexperienced analysts and talking heads who are out there … and how much money it costs innocent investors.

I’m not always right either, but over time, my track record is considered by many to be unparalleled. Especially in the precious metals and mining sector.

How important is the first pullback? Well, just consider the following:

It was the first pullback that allowed me to be one of the first, if not THE first, to predict the great 11-year-long bull market in gold way back in 2000.

And that also gave me the ability to warn you that a failed rally attempt in September 2011 signaled a brand new bear market for gold, just two weeks after gold hit $1,921!

Analyzing the first pullback that comes after a major rally … or, conversely, the first rally in a potential new bear market …

Is a major component of the many models I use. So you can bet your bottom that I am watching the metals — and the miners — like a hawk right now.

Because if the pullbacks pan out as I expect them to, then I’m going to be all over many of the best remaining miners in the world for my subscribers, with companies such as …

Miner A: This core, diversified portfolio includes companies like this, a senior miner with over 90 million ounces of proven gold reserves.

What’s more, buying shares in this company gives you great leverage on the price of gold. It’s almost like buying gold at just $15.51 an ounce — at an 98.73% discount to today’s gold price.

Miner B: Another gem of a miner I’ll soon be recommending has only about 9 million ounces in gold reserves, yet those reserves are currently valued at a mere $1.66 per ounce!

Talk about leverage. When you buy this producing senior miner you are effectively paying $1.66 per ounce of gold, a whopping 99.86% discount from today’s gold price.

And that’s just for starters.

In fact, if you are a Real Wealth member, you’ll be getting the details on these two miners in the March issue, publishing on Friday, March 18.

Until next week, best wishes,