The Next Frontier For Canadian Oil 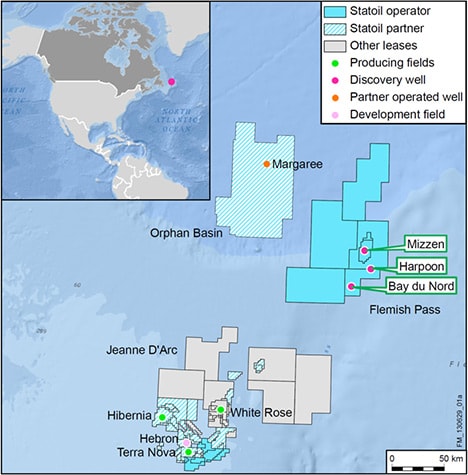 With Oil prices down and dividend percntages up its a good idea to take a look where in Canada future gains can be made – Money Talks Ed. The election of a new, more leftist politician in the province of Alberta has some Canadian oil companies starting to look to investments outside of the oil sands province. Canadian Natural Resources (NYSE: CNQ), Canada’s largest heavy oil producer, has three quarters of its assets inside Alberta, but with the prospect of heavier taxation coming down the pike, Canadian Natural is considering a shift of resources, diverting more of its investment to non-Alberta projects. That could see more of a focus not just abroad, but also in the provinces of Saskatchewan and British Columbia.

But the future could also be bright for some of Canada’s eastern provinces.

The province of Newfoundland and Labrador on the Atlantic Coast is not normally thought of as a huge growth area for oil production. But the provincial government is looking to overhaul its tax regime in order to attract new investment. The exact terms, expected to be more enticing for the industry, should be revealed in a few weeks. Newfoundland Premier Paul Davis recently spoke at a conference and said that the terms his province will offer will be modeled after successful structures seen in Norway and other high production areas. Newfoundland has a lot riding on the prosperity of the industry, which could help plug a $1.1 billion deficit.

The signature project on offer is the Bay du Nord, a field discovered by Statoil (NYSE: STO)that could hold around 600 million barrels of oil. Located 500 kilometers east of St. John’s, the 2013 discovery was Statoil’s third in the Flemish Pass. Statoil has a 65 percent stake and Husky Energy Inc. (TSE: HSE) controls the remaining 35 percent. The two other discoveries – Mizzen and Harpoon – also have potential for significant oil reserves, but the Bay du Nord is the most promising.

But unlike a lot of other offshore basins around the world, the province of Newfoundland requires that companies allow the provincial energy company, Nalcor Energy, to take a minority stake. That has been a key stumbling block for Statoil, which has thus far been reluctant to commit any financial resources to developing the prospect.

Statoil has been negotiating with the provincial government over development terms and on June 16, 2015, Premier Paul Davis said the two sides are “weeks away” from sealing an agreement. “Statoil wants a deal. We want a deal,” Davis said. “I’m optimistic that we will be successful in reaching terms.”

Statoil came out a day later with a more measured tone, with a company spokesman sayingthat it needs a deal “that provides us with competitive terms given the global fight for capital that we’re in.”

If developed, the Bay du Nord would be Canada’s fifth offshore project. Statoil says it will finish its exploration program by May 2016. A final investment decision on Bay du Nord is unlikely before then. If all goes according to plan, it could begin producing by 2020.

The Bay du Nord has raised excitement about Newfoundland’s offshore potential. There are currently only a handful of rigs plying the cold waters off the coast of Newfoundland, but they have been surprisingly resilient amid the bust in oil prices. That demonstrates the seriousness with which some of the oil players are approaching the Flemish Pass, and the Jeanne D’Arc basin just south of there. The number of rigs operating in the region could in fact double over the next three to five years. In an Executive Report from December 2014, we took an initial look into Newfoundland’s offshore potential. Southwest of Newfoundland is the province of Nova Scotia, not too far from the U.S. state of Maine. Nova Scotia has a much smaller history with oil and gas. The Sable offshore natural gas project run by ExxonMobil (NYSE: XOM) has seen its production suffer from consistent decline. The field is running out and will eventually have to be put to rest.

The province thus far has been a minnow when it comes to hydrocarbon production. But the government hopes for that to change. East of the Nova Scotian coast is a project that Shell Canada, a division of Royal Dutch Shell (NYSE: RDS.A), is targeting. Shell just received an environmental permit to begin exploratory drilling off the coast of Nova Scotia. Drilling could begin before the end of 2015.

Shell plans on drilling seven exploratory wells. It finished 3D seismic surveying of the area and if it moves forward, it will drill two wells in the first phase, with follow up drilling dependent on the preliminary results. Shell spent almost $1 billion for four sections in the Shelburne basin, along with its partners ConocoPhillips (NYSE: COP) and Suncor Energy (NYSE: SU). The latter two companies bought stakes in Shell’s Shelburne program, which should be seen by investors as a vote of confidence in the play.

The provincial government estimates that the Shelburne holds 120 trillion cubic feet of natural gas along with potentially 8 billion barrels of oil. 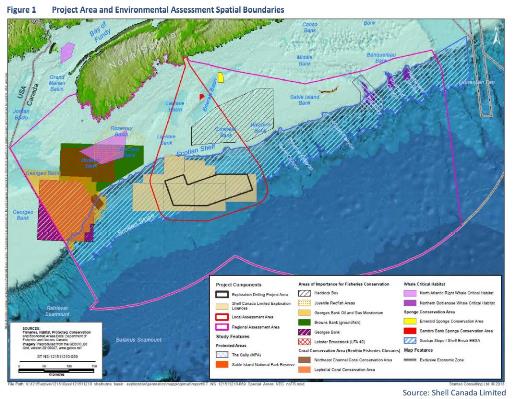 BP (NYSE: BP) also paid around $1 billion to secure the rights to drill of the coast of Nova Scotia. The four blocks BP won the rights to are 300 kilometers southeast of Halifax. BP completed a seismic survey of its holdings in September 2014, and the results looked good. The British company is in the process of putting together a drilling program, which could begin in 2017.

Nova Scotia has only modest prospects for its oil and gas potential but, having had very little to date, the addition of BP and Shell to the mix is nothing short of momentous for the province. It is still early days, however.

Canada is one of the world’s top oil producers. The bulk of that production is in Alberta’s oil sands. But companies are suddenly looking at other Canadian provinces that are trying to roll out the welcome mat.

Of course, provinces like Nova Scotia and Newfoundland and Labrador do not have the vast reserves that are found in Alberta. But they are also extraordinarily underdeveloped, offering enormous upside potential. Many companies have stayed away due to insufficient data on what lies beneath.

But if a few companies push forward and drill some promising exploration wells, the attention could grow. Statoil’s project in Newfoundland remains the most promising at this point. But it will be up to the provincial government to hash out an attractive deal with Statoil.