The Next Experiment, Part 1: Japan Prepares To Buy Pretty Much Everything 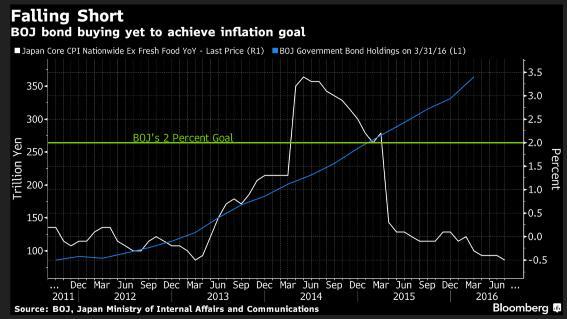 For most of the world, the past decade’s monetary and fiscal experiments are viewed as failures. See, for instance, French support for the EU project crumbling on both left and rightand Why were smart people suckered by Abenomics?

So what do the best and brightest now running global economic policy do when their experiments don’t work? Apparently they double down, repeating the experiment with an even bigger dose. In Japan:

(Bloomberg) – The Bank of Japan could announce a “massive stimulus program” as the nation seeks to reach a 2 percent inflation target, according to UBS Wealth Management.

“It is how much they do, and whether they can create that kind of shock and awe at this point in the cycle,” said Mark Haefele, global chief investment officer at UBS Wealth Management, in a Bloomberg Television interview, on Monday. “They could announce a massive stimulus program both on the monetary and fiscal side or they could end up reducing their inflation targets. Right now, it looks like they are going to use more stimulus. ”

Governor Haruhiko Kuroda said over the weekend in the U.S. that the central bank won’t hesitate to boost monetary stimulus if needed, and there is ample space for additional easing. He also said at the Federal Reserve’s annual policy retreat in Jackson Hole, Wyoming, that the central bank will carefully consider how to best use policy to achieve its price stability target. Benchmark 10-year JGB yields reached a record low of minus 0.3 percent last month before rising to minus 0.07 percent Monday in Tokyo. The BOJ refrained from increasing bond purchases or cutting negative interest rates further in July.

Japan’s inability to achieve its goals has “put that country and that central bank into some kind of jeopardy that they are going to have to work their way out of,” according to Haefele. He oversees the investment policy and strategy for about $2 trillion in invested assets at UBS Wealth Management, according to UBS’s website.

The BOJ is currently undertaking a review of its monetary policy ahead of its next meeting Sept. 20-21. Whether the central bank adopts more stimulus with the yen at its current level or waits to see if it strengthens more is “an open question,” he said.

“It is hard to say that any one move is going to be enough given the history of stimulus in Japan has been erratic,” Haefele said. “But everybody is hoping that they will give it another try because clearly Japan, despite reaffirming their inflation targets, has not been able to hit them.”

Well, yeah, the BoJ doubling down from here would definitely “shock” the markets, but probably not in the positive way its advocates hope. The above chart is a little hard to read (Bloomberg’s esthetic sensibilities have become ever-stranger in recent years) but its point is clear: Three years into an epic debt and money creation binge, the result is approximately nothing. Inflation – that is, the rate at which the yen is losing value – has not only not risen, it has fallen to the point that the yen is gaining value. For a heavily-indebted society, deflation (i.e., an appreciating currency) is an existential threat, as debts that are already too big to manage become even more debilitating.

But if tens of trillions of newly-minted yen didn’t work the first time around, why would tens of trillions more do any better? The answer is that they probably won’t, and are more likely to destabilize the system in one way or another than to produce steady, mildly-inflationary growth.

Meanwhile, if Japan goes for it the way history suggests and most observers now expect, what will they buy with their new yen? BoJ already owns nearly all the available Japanese sovereign debt and a big chunk of domestic equities. So would it buy up the rest of the stock market, or encourage corporations to leverage themselves even further by issuing more debt? Or would it look abroad and start loading up on US and European stocks? All of these possibilities take BoJ outside the bounds of what used to be considered a central bank’s role. So whatever comes next will be new and fascinating from a theoretical standpoint and flat-out crazy from any other angle.

And either way, win or lose, Japan’s next big move will set other players in motion. If it manages to send the yen off a cliff, then Japan’s exporting industries win big – but at the expense of European, US and Chinese counterparts. Europe in particular would have to respond in kind with a big, fast euro devaluation (see the article on France that opens this post). So too would China, the US and maybe even the emerging markets that will be destabilized by hot money inflows if the developed world escalates the currency war.

Whatever way you slice it, 2017 is looking like quite a show. And as always these days, gold looks like the main beneficiary.