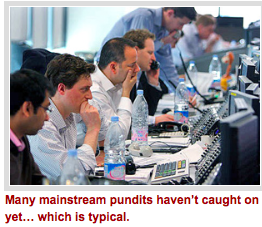 You remember the old Smith Barney commercials, don’t you? The ones from the late 1970s, which starred John Houseman and his impeccable British accent?

The tagline: “They make money the old fashioned way. They eeeaarrrnnn it.”

Thanks to the Federal Reserve, Bank of Japan, European Central Bank and others around the world, investors gave up on doing much research, worrying about risk, or caring about real economic and corporate earnings news. They came to believe that kind of quaint, old-fashioned stuff was as outdated as the black and white TV Houseman’s ads used to run on in my house growing up!

But now, we’re in a whole new paradigm. We’re in an environment where Wall Street investors are going to have to eeeaarrrnnn their profits again because the tide is no longer rising, and lifting all boats. The great global flood of rising liquidity is draining, even with the Fed deciding to stand pat on interest rates this week. You can see the evidence showing up in everything from the junk bond to currency to commodities markets.

At the same time, volatility and risk indicators in bonds, in stocks and in money markets are on the rise. The major stock averages are starting to stumble, while tons of individual names are doing much worse than the indices. Bad news from the real world is increasingly intruding on the fantasyland environment Wall Street has been living in, causing consternation and worry the likes of which we haven’t seen in years. Many mainstream pundits haven’t caught on yet … which is typical. They’re comparing the recent market stumbles to the Flash Crash of spring 2010 and the Debt Ceiling debacle of summer 2011. But I disagree. Those were short-term corrections driven by esoteric, one-off events: A breakdown in market function (2010) and a political stalemate in Washington (2011).

What’s happening now looks to be both more severe and potentially longer-lasting. That’s because these moves stem from huge, underlying changes in the world economy and monetary policy rather than one-off trigger events. At the same time, the technical indicators I watch are flashing a much brighter shade of red now than they did back then.

Could I be wrong? Of course. It’s happened before and it’ll happen again.

But doesn’t it make sense to err on the side of caution?

Don’t you think that with so many warning signs out there, capital preservation becomes increasingly important?

Won’t you sleep better at night giving up some potential gains if I’m wrong, in exchange for dodging huge potential downside risks if I’m right?

I know my answers to those questions. I believe they’re the same ones John Houseman would talk about today if he were still alive. So I recommend you take them to heart when you decide what to do with your hard-eeeaarrrnnned money.