The Negative Interest Rates in Europe 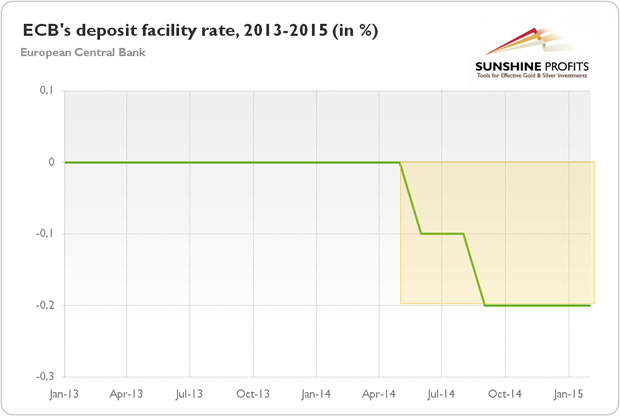 We wrote in one of our daily articles that Sweden had cut its main interest rate into negative territory (-0.10 percent). That way the Riksbank followed other European central banks. Currently, except Sweden, the negative interest rates are set by the Central Bank of Denmark, the European Central Bank and the Swiss National Bank. What does such a historically unusual monetary policy mean for the financial markets?

There is no single general answer, because there is a special story behind each occurrence of a negative rate. For example, the Danish and Swiss cuts were related to managing their currencies rather than to stimulate growth or boost inflation. The Danish kroner is pegged to the euro, so its central bank cuts its certificates of deposit rate (these certificates are used in the open-market operations) into negative territory (currently at -0.75) in order to prevent appreciation of the currency against the weakening euro. A similar rationale was behind the Swiss National Bank’s move, which cut interest rates into negative territory (now at -0.75 percent) in order to prevent capital inflows and neutralize the frank’s appreciation after removing its peg to the euro. In the case of Sweden, the most popular explanation involves deflationary concerns; however the Riksbank could also cut its repo rate in the context of currency wars, because the Swedish kroner has been appreciating against the euro since the end of 2014.

The story of the euro is slightly different, because the Eurozone is not a small open economy, like Switzerland, Denmark or Sweden, which is afraid of capital inflow and currency appreciation due to problems in the Eurozone. Although we cannot preclude the ECB desire to weaken the euro against the U.S. dollar (the decline in interest rates could discourage foreign investors from placing their liquidity in the Eurozone), it does not seem to be the main reason because the monetary planners from Frankfurt cut the deposit facility rate, which is a rate on the excess reserves. The ECB cut this rate for the first time in June 2014 from 0 to -0.1 percent and cut it again in September 2014 to the current -0.2 percent. That way the ECB wanted to provide further monetary policy accommodation and induce banks to lend money from excess reserves into the ‘real’ economy and boost inflation and the economy. What are the consequences of negative interest rates? It seems that not so big, because their level is not very low. Moreover, the deposit rate facility is not the main financial tool used by the commercial banks doing business with the ECB. And they are not forced to hold their excess reserves in deposit accounts (with negative interest rates) – they can keep them in their current accounts. The most important thing is that, contrary to what many analysts believe, the lowering deposit rate into negative territory does not lead banks to lend them out to the private sector. This is because banks do not lend reserves to the nonbank private sector. In other sectors, the banking sector as a whole cannot reduce its reserves – the reserves that leave one bank’s balance sheet just pop up on another. This explains why loans to the private sector in the Eurozone have not increased, but have actually fallen substantially after the reduction of the ECB deposit rate from 0.25 percent to zero in July 2012. So, why has the ECB has introduced them?

Negative deposit rates also impose some costs on banks, which may lower their profitability and even aggravate the problem of sluggish lending. Another important effect is the increase of a relative attractiveness of investing in alternatives, such as gold or Treasury bonds.

This is exactly what we are seeing right now. According to Bloomberg, in Switzerland, “investors are buying more gold as an alternative to hold Swiss franc cash deposits”. As we already explained in October’s Market Overview, lower interest rates mean lower opportunity costs of holding non-interest bearing assets, like precious metals, making them relatively more attractive. If you can earn, say, 2 percent on the deposit, the investment in gold, which you have to store and insure, and pay, say, 1 percent, does not sound very compelling. But when you suddenly have to pay 0.75 percent to hold paper currency, gold looks much better.

This is also why we are witnessing an increasing demand for some European government debts, mostly in Denmark, Switzerland and Germany, which is reducing yields even into negative territory. Yes, it seems strange at a first glance. Why the hell do investors agree to pay for lending money? However, it becomes fully understandable when we take into account the current situation in the Eurozone. In short, investors are eager to pay for holding safe assets, because they fear the collapse of the euro. You can think about such a deal as a currency playing or buying an option. Investors pay the premium, but when the Eurozone breaks up, they would hold gold, Swiss francs or bonds of the relative rich and stable northern countries like Germany, Denmark or Finland.

In other words, some investors are quite pessimistic about the overall economic outlook for the continent and the future of the Eurozone. They are so desperate in their search for safe havens that they pay for the privilege of lending money. Similarly, the recent unconventional central banks’ actions show that they are really desperate. It signals that not only did all the previous monetary stimuli failed to fuel the economy, but also that the global slowdown is coming. Look at the producers’ price indices. The central bankers, as insiders, know that deflation in commodity and industrial prices indicates the crack-up phase of the business cycle.

To sum up, the recent events in Europe seem to be bullish for the gold market. The Eurozone crisis will come sooner or later. Investors predict rather sooner, at least drawing conclusions on the basis of the level of yields on Treasuries. The central banks introducing negative interest rates and implementing quantitative easing (the Riksbank and the ECB), show that a global slowdown is on the horizon. As we constantly repeat, gold is historically the best asset class during slowdowns. The safe haven demand (remember that the Swiss franc, which is traditionally considered as a safe haven currency, is now relatively less attractive) and very low real interest rates would also positively contribute to the prices of gold.