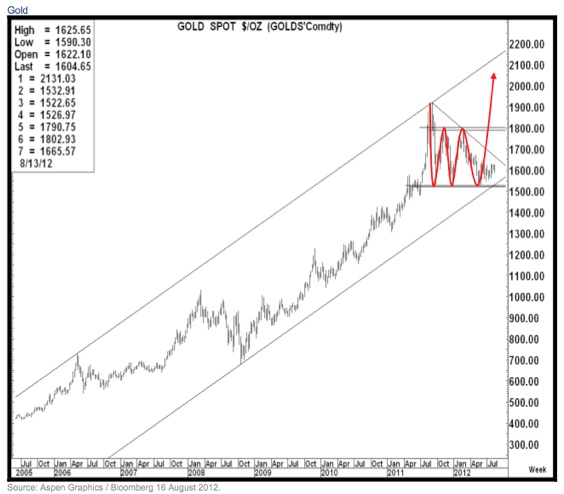 “Gold still remains above the supports in the $1,520 area which the market has tested three times over the past year.  The parallel of the trend across the highs also comes in here (currently at $1,532).  The first resistance level to watch is $1,665 which is the trend line down from the highs and a rally through there would amount to at least a short term bullish break (see chart below).

Important resistance above there is at $1,790-$1,802 which marks the double (or triple) bottom neckline and a breach of that opens the way for new trend highs (see chart below).  The price action here reminds us of what was seen in 2006 after Gold corrected down from $730 to $542 (a more aggressive correction then in percentage terms than the one seen since last year’s high).  The market spent a long time consolidating but ultimately rallied to new trend highs in the second half of 2007 (as the credit and banking crisis worsened). Brent (see chart below) has continued to push higher this week and is above the resistance area around $113 where we saw the previous rising trend line (which became resistance) and the 61.8% Fibonacci retracement of the fall from the Feb high. Having seen the ‘shaky’ US (fundamentals) and keeping in mind that Europe is still in severe economic turmoil in addition to a slowdown elsewhere (especially China), it is difficult to see a rally in Crude of this magnitude coming from a demand side dynamic.  We therefore have to entertain the idea that either Brent will not rally back to $147 or that a supply shock may take it there.

The minimum target on this double bottom (linear) would be a move towards 85 with a percentage change target suggesting as high as 108- Close to the major peaks posted in 1996-1996 (see chart below).

We see the danger of further gains in Oil (particularly Brent) possibly by as much as $30+.  Food prices have risen aggressively and there are few, if any, indications of a turn in trend.  Economic commodities such as metals continue to look weak with breaks already having taken place on the LME Index and Aluminum and key support levels on sight for copper.

1. What we have to pay for is rising in price.

2. What we choose to pay for is falling in price reflecting stresses on the consumer and businesses alike.  This is not a positive dynamic in a very uncertain environment.

3. Over time the outperformer will be a “currency” rather than a commodity (Gold) as major central banks react to the first two and the economic stresses associated with the dynamics there.

The most concerning charts here are those on Oil which we fear will break higher and ultimately create a negative feedback loop that could at some stage become a negative backdrop for equities.  Europe will suffer most given their economic fragility and currency weakness.”

Fitzpatrick also told King World News, “If we were to repeat the 1970 to 1980 move, in percentage terms, that would put a target as high as $6,300, which I mentioned earlier.  However, that incorporated a surge late in the trend in ‘79’-’80, which included a Russian invasion of Afghanistan.  Absent that move, the trend seen at that time would still give us a move on gold to $3,400.”