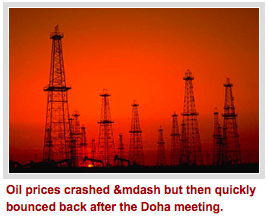 When I coach investors and traders, I’m often asked what I think are the most-common, most-ruinous mistakes that investors make. Unfortunately, there are a lot of them.

And these days, it seems like investors are making almost all of them at the same time.

Then there are mistakes like not knowing when to trade, and equally important, knowing when not to trade or invest, like today’s sideways markets.

But in today’s column, I want to cover what I think is the most-dangerous mistake investors make, bar none. It’s having a set of preconceived notions about what markets can and can’t do.

Consider this weekend’s Doha meeting on oil prices. There was no agreement reached. And what happened Monday morning? But then what happened? Oil prices roared right back, ending the day virtually unchanged.

Why did that happen?

Because longer term, oil is already back in a bull market, and savvy investors are buying the dips. That’s why.

So you see, the fact of the matter is that markets can do whatever they want to do. But they are also never wrong. Markets are never irrational.

They are what they are, and if you don’t understand a market, it’s not the market’s fault; the fault lies instead with your analysis.

For instance, have you ever heard someone say, “A market is defying all logic”?

Or that a market is “disconnected from its underlying fundamentals”?

Markets NEVER defy logic.
And they never defy the fundamentals.

Consider the period from March 2000 to October 2002, where the federal funds rate declined from 5.85% to 1.75%, and the Nasdaq plunged 78%. Put simply, stocks and interest rates went down together! Exactly the opposite of what most would expect.

The fact of the matter is that the relationship between interest rates and stock prices varies considerably depending upon a host of factors, including the value of the dollar, inflation and where the economy is in terms of the economic cycle.

The fact of the matter is that there have been plenty of times when rising oil prices were bullish for stocks … and where falling oil and energy prices were bearish. Exactly the opposite of what most conventional thought tells you.

In truth, the relationship between the trade deficit/surplus and stock prices is exactly the opposite of what most pundits claim.

Or consider the myth about corporate earnings that says they have to rise for stock prices to continue higher. But from 1973 to 1975, the combined earnings of the S&P 500 companies rose strongly for six consecutive quarters, yet the S&P 500 Index fell more than 24%.

Right now, gold is trying to bounce a bit. But it won’t get far. It’s headed lower overall, probably to below $1,200 an ounce …

Before it bottoms for good, in a sort of double-bottom way. Same for mining shares.

The stock market, meanwhile, is also bouncing. But don’t be deceived: It’s headed lower, too. It has not broken out yet.