The Most Ruinous Mistakes an Investor Makes! 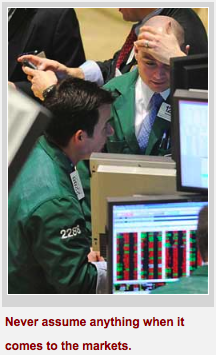 When I coach investors and traders, I’m often asked what I think are the most common, most ruinous mistakes that investors make. Unfortunately, there are a lot of them.

It’s having a set of preconceived notions

about what markets can and can’t do. They are what they are and if you don’t understand a market, it’s not the market’s fault; the fault lies instead with your analysis.

And they never defy the fundamentals.

Consider the period from March 2000 to October 2002, where the Federal Funds rate declined from 5.85 percent to 1.75 percent, and the Nasdaq plunged 78 percent. Put simply, stocks and interest rates went down together! Exactly the opposite of what most would expect.

And the Dow exploded higher, launching from 7,992 to 13,930 — a 74 percent gain! Stocks and interest rates went higher together!

The fact is that there have been plenty of times when rising oil prices were bullish for stocks … and where falling oil and energy prices were bearish. Exactly the opposite of what most conventional thought tells you.

Or consider the myth about corporate earnings that says they have to rise for stock prices to continue higher. But from 1973 to 1975, the combined earnings of the S&P 500 companies rose strongly for six consecutive quarters, yet the S&P 500 Index fell more than 24 percent.

Right now, gold is trying to bounce a bit. But it won’t get far. It’s headed lower overall. So I hope you took me up on my recommendation to hedge any holdings you have via the inverse ETFs I recommended in my past few columns.

The stock market, meanwhile, is also bouncing. But don’t be deceived: It’s headed lower for a while. So here, too, I strongly recommended hedging any positions you can’t exit, for whatever reason, via the inverse ETFs I recommended in my last column.