The Most Important Chart On Wall Street 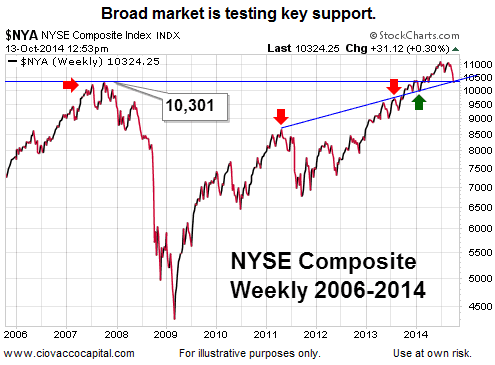 While the S&P 500 is more widely followed, we can gain some insight by looking at the broader New York Stock Exchange (NYSE) Composite Index. Regardless of whether or not the broad NYSE Composite Index can hold above 10,301, we will learn something one way or another about the market’s evolving tolerance for risk. The arrows in the chart below show levels that have acted as support and resistance since 2006. The two blue lines intersect near 10,301. As long as 10,301 holds, the odds of a rally taking place will be higher. If 10,301 fails to attract support from buyers, then the bullish push higher in early 2014 could be classified as a “failed breakout”, which would increase the odds of bad things happening in the weeks ahead. The NYSE Composite closed at 10,172 Monday. The weekly close will provide more information (Friday at 4 pm ET). Foreign Weakness And A Strong Dollar

Stocks have done very little in the “prove it to me” department in recent sessions. Monday’s focus was on slower growth, allowing the string of up and down equity sessions to spill into the new week. From Bloomberg:

How much risk is in the current market? You can decide after reviewing this week’s stock market video, which covers large caps (SPY), small caps (IWM), the VIX (VXX), bonds (TLT), the Dow (DIA), and the NASDAQ (QQQ).

Dollar Down, Bonds Up

Recent economic data and comments from policymakers gave bonds a boost Monday, while the U.S. Dollar (UUP) weakened. From Bloomberg:

The U.S. dollar fell against a basket of major currencies on Monday on persisting concerns about global economic growth and worries that the Federal Reserve may delay its first interest rate hike. Concerns over the health of overseas economies continued in the wake of last week’s weak German economic data and the International Monetary Fund’s cut to its global growth forecast. Meanwhile, Fed officials said on Saturday that a slowdown in the global economy could hamper a tightening of U.S. monetary policy.

The “prove it to me” market keeps blowing through areas of possible support. In Monday’s session, several more levels were taken out (see below). Consequently, we reduced our already small stake in stocks (SPY) further Monday, and added to the cash and bond (IEF) side of the ledger.