The Model & The Dogs or War 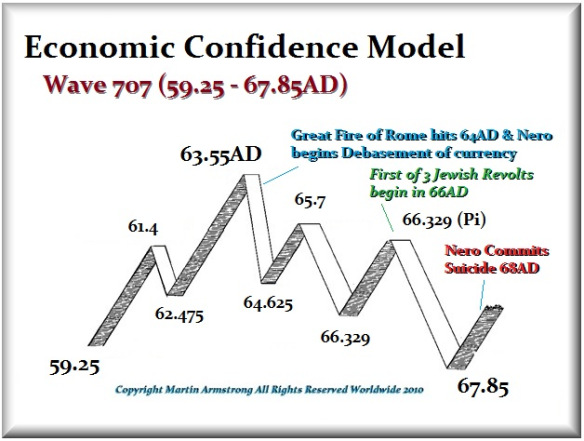 QUESTION: Mr. Armstrong; Your cycle of war seems to be truly amazing. It was a fascinating read. My question is this. I also understand that 911 took place precisely on the day of your model. Besides your cycle of war predicting World War I and II to the day, has your Pi conjunction that targeted 911 ever taken place like that before in history? ANSWER: Shockingly, many times. Even going back into ancient times, the first of the three wars against the Jews also began on that same Pitarget in Wave 707 (starting the Economic Confidence Model at 6000BC). You have to dive into history without a biased perspective and a completely open mind for whatever you were taught in school was most likely slanted, wrong, or fictional. I prefer contemporary accounts rather than modern interpretation that judges the past by current standards. This is like naming Philadelphia after the Greek term Philadelphos meaning“brotherly love” and viewing it through Christian eyes when in fact in ancient times it meant someone who married their sister. Take this period and the stories that Nero played the fiddle while Rome burned. Aside from the historical fact that a fiddle was not invented for about 100 years after Nero, the true events are a completely different picture of Nero than the propaganda that has survived. Nonetheless, no matter how incorrect that propaganda was back then put out by the people he was attacking for their corruption in government, the image of this propaganda still survives to this day. (the same is true with propaganda about the Knights Templar to justify the confiscation of assets by Philip IV of France). Nero was doing battle against the Senate and had unleashed a major reform effort to get rid of corruption. Unlike today, nobody was too big to jail. He cut taxes eliminating a corrupt indirect tax that was much like the European VAT tax today. He allowed servants AND slaves to sue their master if they violated their rights, and he threw even governors in prison for corruption. The propaganda war waged against Nero succeeded. His reputation was tarnish and the corruption won just as there is the Cato Institute today named wrongly after the very man who created the civil war and headed the corrupt oligarchy in the Senate that Julius Caesar fought against.

The bureaucracy was out to destroy Nero to maintain their corrupt ways. You have to realize that this too was a tax revolt during a massive economic decline. You can imagine if more than half of Rome was destroyed (only 4 out of 14 districts were untouched) unemployment soared and businesses were wiped out. Nero followed the VERY SAMEKeynesian model back then – embarked on a major public works project to create employment just as was done during the Great Depression with the WPA. Nero debased the currency to try to restart the economy by increasing the money supply – ancient version of Quantitative Easing. FDR also devalued the dollar in 1934 for the same reasons.

I have said it countless times – history repeats because human nature does the same thing over and over again expecting to achieve a different result and we are TOO STUPID to consult history to ever just ask a common sense question – Has anyone tried this before and what was the result? History remains as a catalogue of solutions if we dare to ever read it objectively.

Act 3, Scene 1, line 273 of William Shakespeare’s Julius Caesar: “Cry ‘Havoc!’, and let slip the dogs of war”. It would be nice if we could learn from history. The vast majority of revolts were caused by raising taxes. No matter how loud I scream, the dogs of war have been unleashed. We are dealing with fate’s judgment.