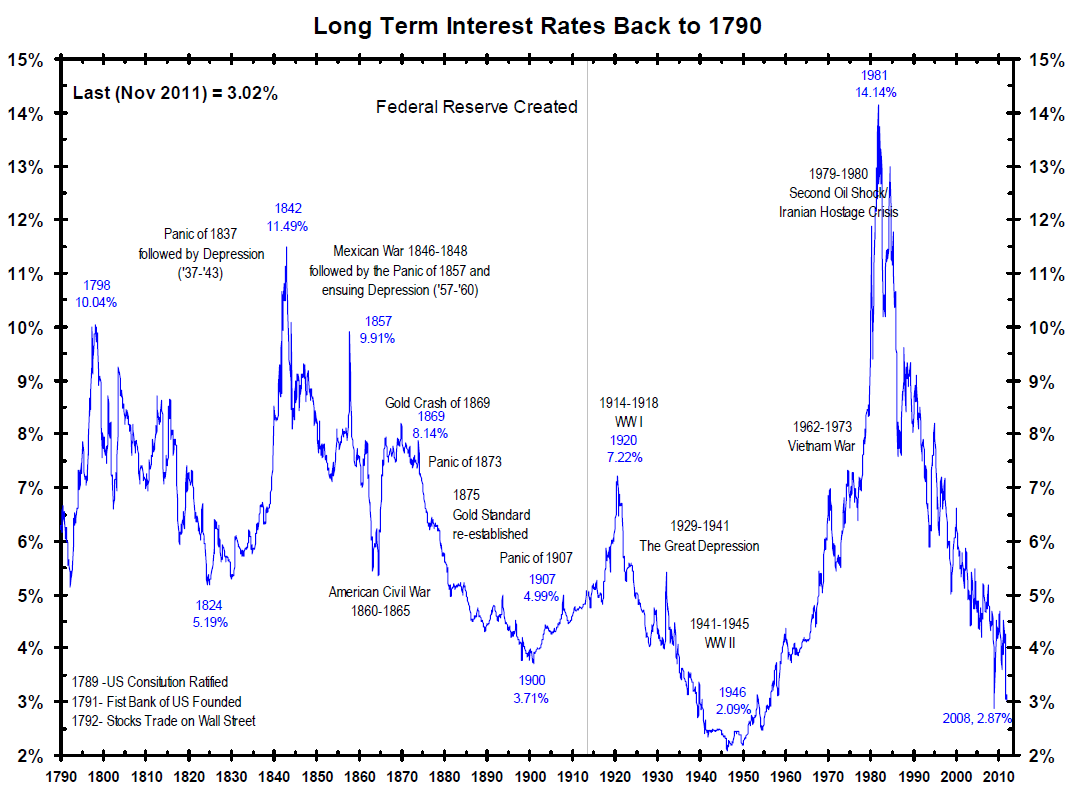 Richard Russell is bullish. While there’s more money sloshing about than he has ever seen in his 88 years of living on this planet and the treasury market has evolved into the biggest bubble in the history of the world, his studies are bullish and the Fed seems to have the Treasury Market well in hand. Despite all this he is still a chronic worrier which is probably a good thing for the rest of us.

Here is one of the latest clips from one of his letters that makes a pretty interesting read:

To be honest, I’m outright bullish on the market myself.  Strange, I woke up Sunday morning with this dream.  Bear markets are meant to clean out the financial garbage, and put the fear of God into investors and politicians.  The crash of 2008-09 failed to do that, mainly because the Fed stepped in and reputedly saved the US and the world from disaster.

Furthermore, bear markets are supposed to put the fear of God into just about everyone.  The crash of 2008-09 failed to dampen the speculative ardor of a good many investors.  Here we are, about 5 years after the 2008-09 crash, and speculative juices are back again.

Here’s my fantasy — the stock market opens one morning, and there are absolutely no bids.  Unexplainably, everyone is frightened at the same time, and everyone decides to wait to see how the market opens.  Finally, a few bids come in, and the Dow opens down 400 points.  There is a minute of shocked indecision, and suddenly the NYSE is flooded with sell orders.

What happened to the people who had fat paper profits?  They were going to sell if the market backed off maybe 50 or 60 points from its record highs.  Their strategy didn’t work, not with a market where the Dow opened down 400 points.  And that’s where my absurd fantasy ended.

But the reality is that my studies continue to look OK. I’m bullish, although I’m still an incurable worrier.  One more thing.  The Treasury bond market has evolved into the biggest financial bubble in history.  But the Fed has the Treasury market well in hand.  So why worry about bonds?

Ed Note: Richard didn’t enclose this Bond Chart, but it is pretty clear where yields were in of 2010 and that they have been improving since then. Yesterday’s NY Times featured a page 1 story on the incredible luxury-building boom in the City.  Evidently, super-luxury housing in NYC is less expensive than it is in London or Hong Kong.

The new 432 Park Avenue super-luxury building will be the tallest residential building in the Western hemisphere.  Already the penthouse has been sold for a cool $95 million.  Who’s buying these insanely priced apartments?  Mostly foreigners who want to establish “getaway” residences, “just in case.”

Other super-luxury buildings are springing up all over NYC.  Said one real estate agent, “It’s not location that is so important, it’s all about bigness and pure luxury.”  A builder states, “It’s all about helicopter views.”  When a person puts $95 million into a New York penthouse, he’s putting his money into an object of tangible value.

But what happens if times get tough?  The cost of carrying that penthouse becomes prohibitive.  The penthouse is not moveable.  Thus paying $95 million for a penthouse is a risky play, and you have to hope that underlying conditions don’t change.  Ironically, the same article in the Times states that the median family income in NYC has fallen 8% since 2008.

Russell comment — I’ve never seen so much money being sloshed about.  Nor have I ever seen so much news of corruption and criminal activity.  Maybe the media is just doing a more thorough reporting job than ever before.

I must admit that I am fascinated with the current stock market.  I feel that I am almost daring the market to push higher.  And yet, with it all, I don’t see any indications of danger in my studies.  If this market does top out, it will top out without any of the usual signs of trouble.  Until then, I remain bullish.  After all, I’ve never seen a market turn down on its own with no signs of danger prior to the top-out.

“I think the gold miners will fly once gold gets over 1500.  This crunch job on gold is the crudest manipulation job I’ve ever seen.

The Fed wants to kill all signs of inflation to hide the damage they’re doing to the middle class.  First the Fed leaves food and energy out of the CPI, and then they get the Labor Department to lie about the figures.  Their last trick — smash the price of gold and silver.  What are they going to do when the bond market (fearful of inflation) collapses?  You can’t fool all of the people all of the time.”