The Market Just Changed, Change With It! 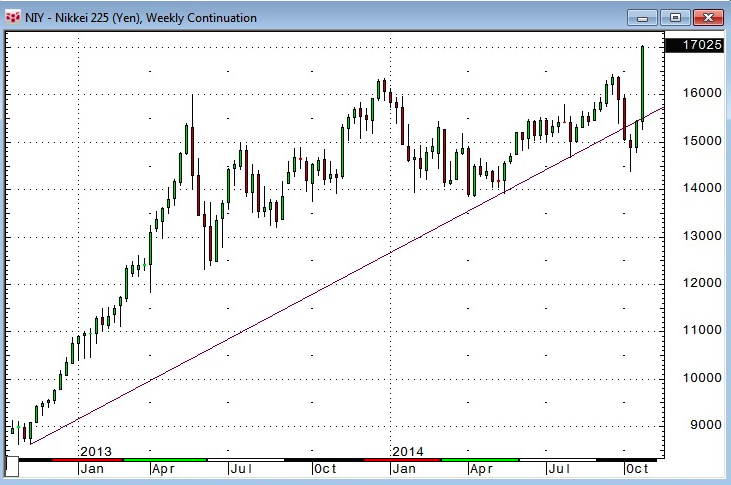 The BOJ used “shock and awe” on the markets last week…announcing a MASSIVE increase in their QE program…a program they hope will end 2 decades of deflation in Japan. The Japanese Government Pension Investment Fund (GPIF) added to the “shock and awe” by announcing that they would switch ~$250 Billion of their portfolio from bonds to stocks…thereby effectively “green-lighting” all major pension funds in Japan to dump bonds and buy stocks. On the announcements the Yen fell ~3.5% to 7 year lows, the major Japanese stock indices jumped ~8% to 7 year highs, and the major American stock indices soared to New All Time Highs. We think the BOJ/GPIF announcements may have been one of the most important financial events of the year…and may signal another leg higher in the US Dollar and in the major global stock indices. Money “printed” in Japan can and will find its way to markets around the world.

The BOJ’s new stimulus program is bigger, in relative terms, than anything previously done by any major central bank…they are “going all-in!”  They will “print” the equivalent of ~$750B each year…given that the Japanese economy is about 1/3 the size of the US economy their level of stimulus is about double what the Fed was doing when they were running “full throttle.” The GPIF will reduce the bond portion of their portfolio (effectively selling their bonds to the BOJ) from ~60% to ~35% while expanding the equity portion of their portfolio from ~25% to ~50%. They are expected to buy ~$90B of Japanese stocks and ~$110B of non-Japanese stocks.

The BOJ’s surprise announcement came only a day after the Fed announced the end of their latest round of “money printing”…thereby adding to the market’s perception of DIVERGENT monetary policies between the USA and “the rest of the world.” This divergence plays out in favor of the US Dollar.

For several years we have believed that EXPECTATIONS of Central Bank policy have been the main “driver” of Market Psychology…at the margin nothing else mattered…buyers would be more aggressive than sellers so long as they believed that the CB’s “had their backs.” We think that last week’s BOJ/GPIF announcements will have a HUGE impact on Market Psychology going forward.

Over the past 2 years we have frequently posted charts of American stock indices with an uptrend line beginning in November 2012…the date the BOJ began their first (Abe inspired) wave of  “money printing”…we believed that the BOJ actions since 2012 “underwrote” part of the rally in global stock markets…we can imagine that Phase 2 of the BOJ’s reflationary efforts will have a similar bullish impact on world stock markets…that the uptrend line will extend into the future…likely at a steeper angle.

Regular readers will notice a “change in our tune.” We have been opportunistic short sellers of the American stock market this year…we’ve been expecting a “topping process” that would produce price breaks and rallies…but not new highs. We thought that the September 19 highs might be the highs for 2014…if not longer…BUT… last week we specifically stated that IF the DJIA rallied past the 17006 level then the October break was probably another “Buy the Dip” opportunity and new All Time Highs would be likely. Well the DJIA went through 17006 like a “hot knife through butter” the day BEFORE the BOJ/GPIF announcements and closed the week at New All Time Highs. (We don’t even want to think about who might have known…)

We are traders here…first and foremost. When the markets change…we change. We trade our own money and we manage some money for friends and clients. We are very cautious about using leverage. We’ve had profitable trades and losing trades and we’ve certainly had trades that we didn’t make that we should have…witness our blunder in not re-establishing our short position in crude oil this summer…BUT…we constantly ask ourselves, “Are we trading the market the way we think it SHOULD be…or the way it is?” Right now the path of least resistance for the US stock market looks higher!

Because we can’t say it enough, we think the “Shock and Awe” from the BOJ/GPIF may have been one of the most important financial events of the year…we can imagine “Phase 2” of the BOJ reflationary efforts…this time with the “added punch” of the GPIF (and other Japanese pension funds that will likely follow suit)…will cause the Yen to fall…will cause the Dollar to rally…and will cause the global stock markets to rally.

The “mantra” at this blog throughout 2014 has been that capital is “Coming to America” for safety and opportunity. We can imagine a reprise of the virtuous circle of the late 1990’s when the US Dollar rose ~50% and the S+P rallied from 500 to 1500!

The falling Yen is another aspect of “Currency Wars” and will export deflation from Japan to the rest of the world. The last thing the Eurozone needs at the moment is more deflation…therefore the BOJ action may inspire intensified reflationary efforts from the ECB…which would pressure the Euro lower Vs. the Dollar.

If these actions from the BOJ/GPIF do not end deflation and deflationary expectations in Japan…then what? A couple of years ago we wrote that the “Authorities” were only fighting a rear-guard action against deflation…maybe that’s how it will play out…maybe not…but it feels like we just stepped into a Brave New World and the stakes are way bigger than they were before.

The major Japanese Stock Indices rallied ~8% (in a day!) to new 7 year highs on the BOJ/GPIF announcements… While the Yen fell~3.5% to 7 year lows against the US Dollar… The Yen may be starting another leg down against the Euro…after falling ~30% since Phase One of the BOJ reflationary efforts started in late 2012. The US Dollar rallied against nearly all currencies last week to close at new 4 year highs…for the past year and more we have believed that the US Dollar was beginning a multi-year rally as capital “Came To America.” The S+P 500 benchmark of American stocks soared to New All Time Highs following the BOJ/GPIF announcements…and may be about to resume the uptrend it’s been on since Phase One of the BOJ reflationary efforts started in late 2012. Gold: You might have expected gold to rally on the Japanese reflationary actions…BUT…it fell to 4 year lows…it seems that the King Dollar trumped any worries about “excessive money printing.” Perhaps the gold price action reflects the concern that inspired the Japanese Authorities to act…namely, that Deflation is gaining ground…despite all the efforts of all the king’s men….we should note that gold did rally in Yen terms on Friday….BUT… Gold in terms of the S+P 500 fell to new 7 year lows…down ~60% since gold made its All Time High in 2011. For the last 3 years the market has clearly preferred stocks (paper) over gold. Central banks hate deflation and (apparently) will “print money like crazy” to fight deflation…the expectation of all that “printing” has been very bullish for stocks…but not for gold…perhaps someday it will be bullish for gold.