The Launch Pad: 1,700 in sight for the S&P, Europe reacts positively to PMI data 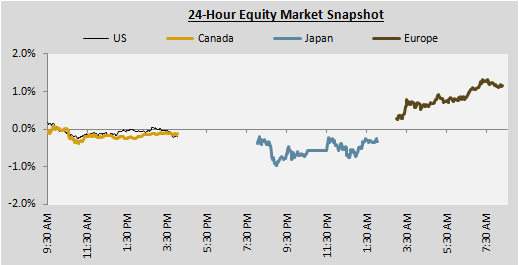 Is the European recession over?  Some are placing their bets that it is.  Quarterly GDP will not be released for another 3 weeks, but we are seeing predictions that the streak of economic contraction, which has lasted the past 6 quarters, will come to an end.  Business Insider’s Joe Weisenthal has put together a few of the arguments.

It is notable that the Euro Stoxx index has risen 22% since the December 2011, when the streak of negative GDP started, and was down 20% for the period of Sept 2009 through Dec 2011 when GDP was positive.  Leading indicator indeed…

Today, Euro shares are powering forward to the tune of 1.2% today following a flat session in the A-Pac region.  Gains are broad based across the zone and led by the banks with 3% days for SocGen and BNP Paribas.  Bond yields are pushing higher as well – particularly in Germany where the 10 year is higher by 6 basis points.  With the German 10 year still only yielding 1.61%, it remains as one of the few sovereigns that hasn’t had a significant correction this summer.

Manufacturing data was strong in Europe and soft in China, say what?  Yes, the HSBC preliminary PMI data for China came in at 47.7 which was below estimates and last month’s reading of 48.2.  A reading below 50 is contraction.  Meanwhile in Europe, PMI came in at 50.3 which was better than the 49.2 estimate and better than last month’s 48.6.  An interesting turn of events.  Germany, as usual led the way in Europe, but other nations had surprising survey results as well.  One of the main drivers is that vehicle demand is on the rise, especially the luxury variety. Bloomberg has more.

The wave of bank preferred share resets continues.  First BNS, then TD, and now BMO is joining the fray as the BMO series 16 preferred shares (BMO.PR.M) are being reset on August 26th to 165 basis points over the 5 year bond (if that was today, the new rate would be 3.40%) for the next 5 years.  This is a significant haircut from the 5.20% dividend it now carries.

Remember, holders have the choice to convert to a series which floats at 165 basis points over the 3 month treasury bill (for a current 2.65%), resetting every quarter.

No surprise here – we are currently using 200 basis points as the line below which banks will extend vs. call in the fixed resets.

Believe in the US housing recovery?  Recent data shows California foreclosures are down 55% year-over-year.  DataQuick provides the hard data city by city on the numbers (sourced, as usual, via Calculated Risk – McBride’s quote: ”It looks like this will be the lowest year for foreclosure starts since 2005, and also below the levels in 1997 through 1999 when prices were rising following the much smaller housing bubble / bust in California”)

We should probably expect more lawsuits like this one surrounding the LIBOR price fixing scandal is coming forth.  The city of Houston is suing a group of banks, citing specific instances where manipulation of LIBOR negatively affected municipal finances.  Bloomberg has more.

The tech sector looks especially strong today thanks to Apple, beating estimates.  Some analysts still can’t shake their doubts about the depth of the current rally, Market watch has even gone so far as to call it the zombie market.

Remember the two big worries at the beginning of the year;  the fiscal cliff followed by the sequester.  Each of these represented the next big crisis for the markets and both seem to have faded into distant memories as U.S, markets continue to make record highs.  The Washington post took a look at the real effects of the sequester, and of course there is both good and bad news.

The latest MBA Mortgage Applications results are in and it looks like mortgage application have decreases slightly as mortgage rates have been creeping higher. Here are some excerpts from the Latest Weekly Survey

The refinance share of mortgage activity remained unchanged at 63 percent of total applications.

The average contract interest rate for 30-year fixed-rate mortgages with conforming loan balances ($417,500 or less) decreased to 4.58 percent from 4.68 percent, with points decreasing to 0.40 from 0.42 (including the origination fee) for 80 percent loan-to-value ratio (LTV) loans.

The long awaited saga of the Dell buyout should reach its conclusion today.  The story has been mostly between iconic businessmen Michael Dell and Carl Icahn.  There have been endless headlines detailing the public spat with each trying to influence the public opinion in their favour to gain a few extra percentage points in the vote. Just as political elections are determined by precisely who comes out to vote, so it may be with Michael Dell’s proposed $24.4 billion buyout of the computer maker he founded 29 years ago. The investor participation and the know parties against the move to have Dell go private don’t’ bode well for having the deal approved.

Never having seen a forest fire, this video is a rely eye opener as to how fast they can move.

The Speed of Fire

There is tons of company news this morning.  Let’s begin with the biggie.  Apple reported $7.47 in earnings for Q3 which was better than the $7.30 estimate.  This was down from the same quarter last year but given the lineup of older products, the expectations were pretty low.  Shares are up almost 5% in the pre-market.  Sticking with good news, lots of other tech names are higher this morning.  VMWare is up a whopping 13% after Q2 beat on both earnings and sales plus the company that helps manage server loads, raised their year end view.  EMC is up 4% on solid earnings.  Beyond technology, Eli Lilly posted Q2 of $1.16 above the $1.01 consensus and raised full year guidance range by about 15 cents.  Shares are up 3%.  Boeing reported $1.67 above the $1.58 estimate and reported a record backlog of $410 billion.    Ford reported Q2 of $0.45 which was better than the $0.37 estimates.  The company also raised its pretax profit guidance for 2013.

There is some bad news, Broadcom is down 9% after reporting a miss on revenue.  Caterpillaris down 2% after reporting $1.45 which was below the $1.68 consensus.  The company also cut its earnings forecast for the year.

Canadian Pacific reported roughly inline revenue at $1.5B but earnings of $1.43 was below the $1.50 estimate.  Floods appeared to be a problem.  Canadian Natural Resources is buying $223m worth of energy assets from Barrick Gold.   Cenovus Energy reported earnings of $0.34 which appears light with consensus sitting at $0.49.  Rogers reported $0.96 which is a penny below estimates, while subscriber growth was much stronger at 98k vs. 74k estimates.  Encanareported $0.34 compared to estimates of $0.17 and sees year end cash flow at the high end of previous guidance.

Commodities are down a bit this morning with oil off $0.50 and gold down $8.    We will see some US inventories later today at 10:30, expectations are for a 2.8m draw in crude.  Gold has put together a number of decent days yet we still see daily net selling of gold ETFs.

Treasury yields continue their grind higher for a consecutive day, buoyed mostly on risk taking from stronger PMI readings out of Europe. Both German (+50.3) and French (+49.8) purchasing manager index readings improved in July to bring aggregate Eurozone PMI to +50.1 this month. The renewed prospects for an economic turnaround in the beleaguered region are helping markets shrug off a Chinese manufacturing update overnight that reported a drop in their index to 47.7 — a second straight month of contractionary signals. Risk aversion is being pushed to the wayside with stronger corporate earnings out of Apple and Ford as well, with 10 and 30 year Treasury benchmark returns up by nearly 8 basis points (to 2.57% and 3.64%) since the close last Friday. Note the lack of a steepening move in the latter part of the yield curve with the 10-30 spread actually narrowing by 4 basis points over this period. We noted last month that there appeared to be some exhaustion in the long bond with inconclusive Fed tapering talk acting as a ceiling on yield movement (an assertion on low inflation expectations also acted as a barrier). Markets instead moved up the curve and turned the 10 year benchmark into a tug of war with volatility in middle duration Treasuries nearly outpacing their 30 year counterparts. In fact, if you go back just two weeks we’ve seen a yield boundary of more than 25 bps in 10’s versus just 16 bps in the long bond. Expect this to continue until we get more clarity on timing from the Fed’s buyback program.

A quiet session north of the border thus far today with Canada bond benchmarks underperforming Treasury markets slightly. Yields on the US 10 year have not relinquished their lead from late June that saw their returns surge past our domestic benchmark, and despite trading patterns that have more or less remained in lockstep since, we continue to see a lower yield despite higher overnight rates. The lack of steepening in our curve has been notable these past few months as markets are clearly gearing expectations for a more bullish US economy. A $3.3B two year Canada bond auction will be taking place at noon today, but results are likely to be overshadowed by the US $35B 5 year sale at 1PM. We’ll be hoping for a result in our sale that is as strong as the US Treasury department’s from yesterday — the $35B in 2 year notes managed a 3.08 bid to cover with a high yield draw of just 0.336% (both stronger metrics from prior).

Chart of the day Quote of the day

“One of the painful things aboutour time is that those who feel certainty are stupid, and those with any imagination and understanding are filled with doubt and indecision”

Macquarie Private Wealth Inc., or their associates, officers or employees may have interests in the financial products referred to in this information by acting in various roles including as investment banker, broker, lender or advisor. Macquarie Private Wealth Inc. or their associates may receive fees, brokerage or commissions for acting in these capacities. In addition, Macquarie Private Wealth Inc. or their associates, officers or employees may buy or sell the financial products as principal or agent. The comments and opinions expressed in this presentation are, except as otherwise noted, the comments and opinions of the Author and may differ from the opinion of Macquarie Private Wealth Inc. (“MPW”) and should not be considered as representative of MPW, belief, opinion, or recommendations. The statements and statistics contained herein have been prepared by sources we believe to be reliable but we cannot represent that they are complete and accurate. This material is published for general information only. MPW and the Author assume no liability for financial decisions based on this information. Readers should obtain professional advice before applying any ideas mentioned to their own personal situation to ensure their individual circumstances have been properly considered. Insurance Products are available through Macquarie Insurance Services Ltd. Links to other websites or references to products, services or publications other than those of Macquarie Private Wealth Inc. (MPW) on this website do not imply the endorsement or approval of such websites, products, services or publications by MPW. MPW makes no representations or warranties with respect to, and is not responsible or liable for, these websites, products, services or publications.

Macquarie Private Wealth Inc. is a member of the Canadian Investor Protection Fund and IIROC.