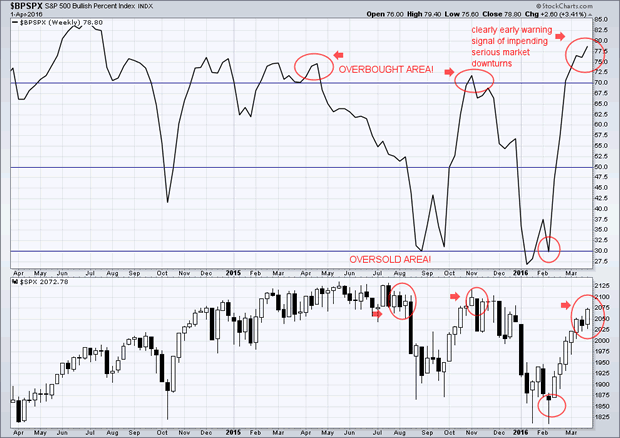 Currently, we are experiencing the SPX topping formation. Again, it is dangerously overextended. The SPX staged a strong rally due to the repeated actions of Central Bankers, during the month of February 2016. Presently. we are truly living, investing and trading in ‘unprecedented’ times. Another push higher is not out of the question, at this time, into ‘nominal’ new highs as we experienced this past Friday, April 1st, 2016 and then within a week or two it should start cycling back down.

There are strong ‘headwinds’ straight ahead for any attempted rallies that may take place. There is ‘bearish’ divergence within several momentum oscillators. This is signaling major warning signs! There are no bullish or favorable long set ups in the market place environment. I would look towards ‘unexpected’ choppy price movements across the board. Investor sentiment has reading levels associated with ‘peaks’ in the equity market advances. Courtesy of ivewmakets.com

It is dangerous when the markets have nothing of substance sustaining them, other than their dependence on the FED’s announcements regarding its’ monetary support. It is extremely dangerous when the FED tailors its’ remarks so as to support financial asset levels. This is not the mandate of the FED, however, we are all waiting with anticipation, to hear their future announcement!

When Dr. Janet Yellen can make a couple of phone calls and implement an equities rally into new highs in 2016, of the equity markets, as of last Friday, April 1st, 2016, then we become the ‘fools’ who believe and buy into it!

Interventions by Central Banks, cannot change the long term trend from ‘bearish’ to ‘bullish’ I don’t think anymore. They are merely delaying the inevitable and just creating a ‘slow roasting bear market’ (as I have previously mentioned for several months is starting to unfold in the US large cap stocks). While these actions of the Central Bankers are now behind us, we are currently entering the earning season, which is most likely to disappoint Wall Street analysts.

The U.S. is currently experiencing the worst financial and economic recovery during the history of the countries’ worst financial crisis’ and ‘recession’, since the Great Depression. Most people don’t realize what is happening and thus don’t see or feel much of this recession, but it’s there building momentum in the background and it will be a rude awakening for most once the breaking point is reached.

In short, the US stock market is at the topping point. Odd favor a major market downturn that will last before the next bounce, and then continue yet again even lower.

This will be a big surprise to most but my followers and I have been watching this unfold for months and are stocking the market to time the next BIG SHORT to make our killing.