The Hidden Truth of Higher Prices 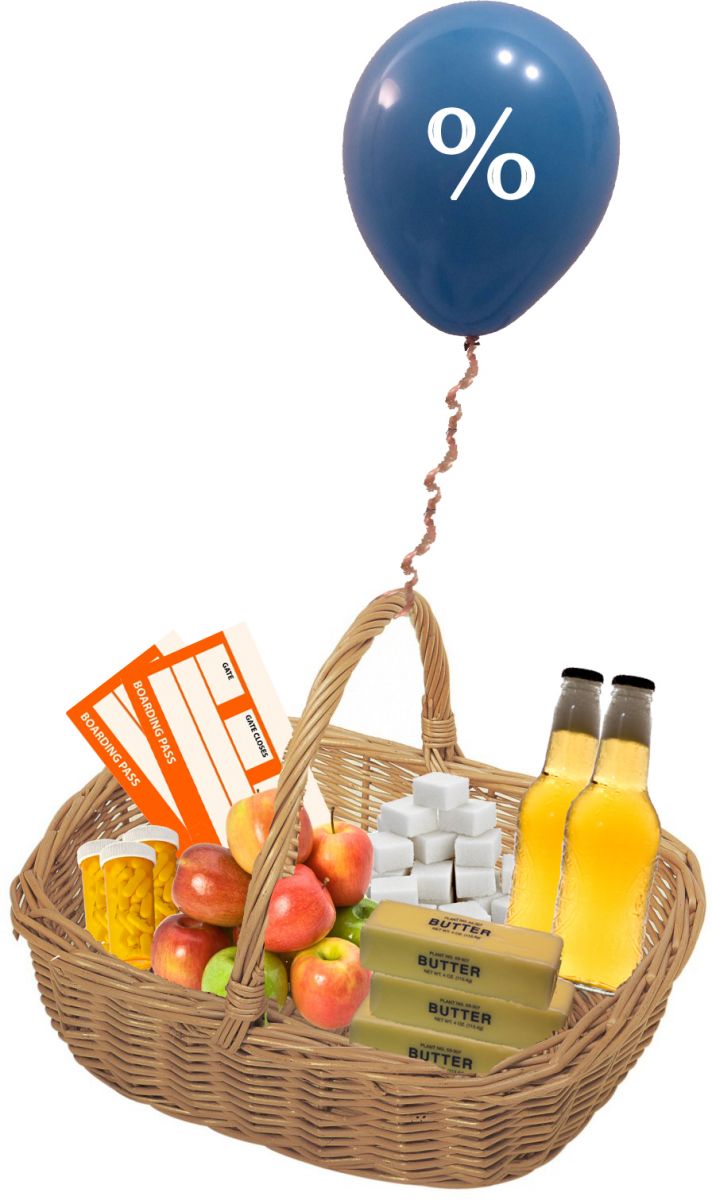 In dismissing the inflationary warnings of Austrian School economists, the pro-stimulus Keynesians have largely refrained from attacking the root of our logic. (Given that this involves defending the position that money printing does not lead to inflation, their reluctance is understandable). Instead they point to the lack of “evidence” that shows prices going up in step with money supply increases.  Paul Krugman himself unpacked these arguments in a recent blog post designed to specifically discredit my views.

According to Krugman, the sub 2.5% increases in the Consumer Price Index (CPI) over the past few years are all that is needed to invalidate the fears of the inflationists. However, there is plenty of evidence to suggest that the measurement tools used by Krugman and his cohorts to measure inflation are as deeply flawed as their arguments. And to conclude that inflation has been quelled requires a dismissal of the macroeconomic forces that have temporarily blunted the impact of an overly loose monetary policy.

Since the 1970’s the preferred government inflation metrics have changed so thoroughly that they bear scant resemblance to those used during the “malaise days” of the Carter years.  Government and academia defend the integrity and accuracy of the modern methods while dismissing critics as tin hat conspiracy theorists. But given the huge stakes involved, it’s hard to believe that institutional bias plays no role. Government statisticians are responsible for coming up with the methodology and the numbers, and their bosses catch huge breaks if the inflation numbers come in low. Human behavior is always influenced by such incentives.

Beginning in the early 1980’s the methodologies were altered to compensate for a variety of consumer behavior. The new “chain weighted CPI” for instance incorporates changes in relative spending, substitution bias, and subjective improvements in product quality.

Essentially these measures report not just on price movements, but on spending patterns, consumer choices, and product changes. This is fine if the goal is to measure the cost of survival. But that is not the purpose for which these metrics are meant to be used.  But if you simply focus on price, especially on those staple commodity goods and services that haven’t radically changed over the years, the underreporting of inflation becomes more apparent.

We randomly identified price changes of 10 everyday goods and services over two separate 10 year periods, and then compared those changes to the reported changes in the Consumer Price Index (CPI) over the same period. The 10 items, which we selected are: eggs, new cars, milk, gasoline, bread, rent of primary residence, coffee, dental services, potatoes, and electricity.

We know that people do not spend equal amounts on the above items, and we know their share of income devoted to them has changed over the decades. But as we are only interested in how these prices have changed relative to the CPI, those issues don’t really matter. We chose to look at the period between 1970 and 1980 and then again between 2002 and 2012, because these time frames both had big deficits and loose monetary policy. But they straddle the time in which the most significant changes to inflation measurement methodology took effect. And while nominal price increases rose much faster in the 1970’s, the degree to which the prices rose relative to the CPI was much, much higher more recently.

Between 1970 and 1980 the officially reported CPI rose a whopping 112%, and prices of our basket of goods and services rose by 121%, just 8% faster than the CPI. In contrast between 2002 and 2012 the CPI rose just 27.5%. But our basket rose by nearly double that rate – 52.1%!  So the methods used in the 1970’s to calculate CPI effectively captured the price changes of our goods, but only got half of those movements more recently. How convenient.

Just to make sure, we ran the same experiment with 10 different goods and services. This time we chose: sugar, airline tickets, butter, store bought beer, apples, public transportation, cereal, tires, beef and veal, and prescription drugs. The results were notably similar. The basket increased 1% faster than the CPI between 1970 and 1980 and 32% faster between 2002 and 2012. In both cases we selected a random array of food and non-food items.

To be convinced that the CPI does a poor job in gauging the cost of living, all one needs to do is look at health insurance. According to the Kaiser Survey of Employer Sponsored Health Insurance, the average annual total cost for family health insurance in 2012 was $15,745, or more than one third of the median family income of $45,018 per year. Yet these costs are largely factored out of the CPI. In 2011, health insurance costs did not even merit a one percent weighting in the CPI. Furthermore, as far as the Bureau of Labor Statistics is concerned, health insurance costs are well contained. From 2008 through 2012, the BLS’ “Health Insurance Index” increased just 4.3% (total), which is far below the general rise of the CPI. In contrast, the Kaiser Survey showed family coverage rising 24.2% over that time.

A recent poll of likely voters conducted by Fox News in the weeks before the election, revealed that 41% of respondents identified “rising prices” as their top economic concern. This response beat out “unemployment” by nearly two to one.

The underreporting of price movements would explain why inflation is a concern on Main Street even while it’s not a concern on Pennsylvania Avenue. If these price changes in our experiments had been fully captured, CPI could currently be high enough to severely restrict Fed action to stimulate the economy.

But beyond arguments over the accuracy of our inflation yardsticks, there are solid reasons that prices are not rising as fast as they could be given the printing binge that has characterized the last few years. Economies no longer come in the neatly packaged national varieties. To a very large extent monetary conditions within the United States now are being influenced by activities of other countries.

Over the past years, unprecedented amounts of dollars have been created. But much of that money does not stay within the confines of the U.S. economy. A very large percentage of it winds up locked away inside the vaults of foreign central banks, particularly in the Far East. Countries like China and Japan, that run large trade surpluses with the U.S., need to warehouse these greenbacks so that they can keep their own currencies from appreciating against the dollar. The International Monetary Fund estimates that from first Quarter 2008 and second quarter 2012, U.S. dollars held in reserve by foreign central banks increased by $850 billion, or 31%.

When these countries decide that holding huge amounts of dollars is no longer in their interest, the money could come flooding back onto these shores, where it will exert upward pressure on domestic prices. In the meantime, the current flow of funds allows for a windfall for U.S. consumers. An artificially supported dollar means that we do not pay as much as we could for imported products. The low prices at Walmart are not the result of a sluggish U.S. economy, but by greater production abroad and dollar support from foreign central banks.

But in the meantime, it’s not as if those dollars have been neutered of their price raising power. Rather than being spent by U.S. consumers to push up domestic prices, they are creating inflation abroad and helping to push up the prices of U.S. Treasury Bonds, which foreign central banks buy with their excess dollars.

Given how weak the economy has been since the crash of 2008,it is surprising that domestic prices have risen at all. While there have been many similarities between the Great Depression and the Great Recession, one great difference was that the crash of the 1930’s was accompanied by significant deflation. By some estimates, prices fell by about a third.  And so while consumers and businesses then struggled with unemployment and dropping share prices, at least they were cushioned by falling prices. Today we have no such support.

The Bureau of Economic Analysis reports that in December of 2008 food and energy spending, as a share of wages and salaries, had fallen to a low of 18.7%. Today that figure stands at 22.1%, an increase of more than 18% in just four years. This indicates that the stimuli of the past four years have failed to create the beneficial impact its architects had hoped.  People who are spending a higher percentage of their incomes on necessities like food and energy are likely to be experiencing lower living standards.

Unlike Krugman and the Keynesians, I would argue that it is impossible to create something from nothing. I believe that printing a dollar diminishes the value of all existing dollars by an aggregate amount equal to the purchasing power of the new dollar. The other side takes the position that the new money creates tangible economic growth. I think that those making such absurd claims should bear the burden of proof.