The Greatest Episodes of Market Manipulation…Is $200 Silver Next?

Posted by Pete Krauth via 321Gold.com 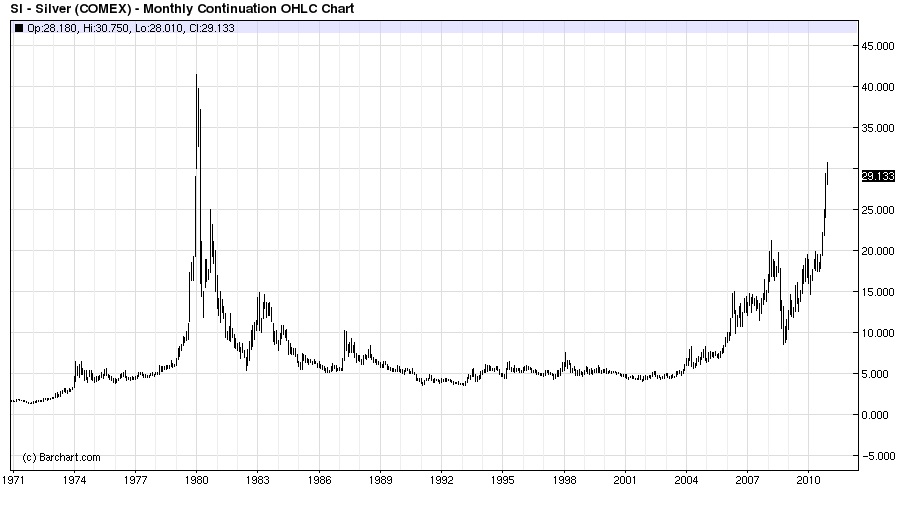 From the Tulip Mania of the 1600s all the way to the recent housing bubble, market manipulators have employed a wide range of tactics to lighten the wallets of unsuspecting investors.

And even though market manipulation is prohibited in the U.S. under a section of the Securities Exchange Act of 1934– it’s as American as apple pie.

Everyone from high-ranking government officials to investment bankers have been caught with their hands in the cookie jar.

Jim Cramer, the host of CNBC’s “Mad Money,” said he regularly manipulated the market when he ran his hedge fund, calling it “a fun…and lucrative game.”

Not surprisingly, a recent study found that those closest to the information loop -corporate insiders, brokers, underwriters, large shareholders and market makers – are most likely to be the perpetrators.

To give you an idea of how things work, here are three notorious examples of market manipulation.

Stock Market Manipulation Is
as Old as the Hills

1) The Erie War: In 1867, American financier and railroad builder Jay Gould sat on the board of directors of the financially troubled Erie Railroad.

In what is known as the ‘Erie War’ Gould fought to keep Cornelius Vanderbilt from acquiring Erie and consolidating the industry.

To pull it off, Gould issued 100,000 shares of new Erie stock by illegally converting debentures.

He then used the money to bribe New York legislators to make the conversion legal. Outfoxed, Vanderbilt settled, receiving $1 million as a sweetener.

Afterwards, Gould vastly expanded Erie’s debt and launched it on an expansion campaign. Meanwhile, he sold its stock short, and made a killing before Erie went bankrupt in 1875.

Enron soon began trading these markets to drive up energy prices and significantly increase its revenue. Meanwhile, Lay and CEO Jeff Skilling used accounting loopholes and misappropriated investments to keep billions in debt off the books.

But perhaps their greatest feat was their ability to pressure Arthur Anderson & Co. staffers to cooperate in fooling the board of directors and audit committees.

Investors lost more than $70 billion when the Enron scandal ended in one of the biggest bankruptcies in history, driving its stock down from a high of $90 per share in mid-2000 to less than $1 by the end of November 2001.

Andersen, one of the five largest accounting partnerships in the world, lost most of its customers and shut down.

The scandal eventually led to the enactment of the Sarbanes-Oxley Act to expand the accuracy of financial reporting for public companies and punish those attempting to defraud shareholders.

Now anyone can reach millions of potential traders instantly, all while remaining completely anonymous.

In 1999, two UCLA students drove the stock of a bankrupt printing company from 13 cents to more than $15 in twotrading days, dramatically demonstrating how the Internet had transformed the old game of stock market manipulation.

The students had spent two weeks acquiring 97% of the thinly traded stock of NEI Webworld Inc., The New York Times reported. After the market closed on Friday, they sent out hundreds of messages on Internet bulletin boards touting a takeover and the huge profits to come.

On Monday, based on orders made by those who believed the fake postings over the weekend, the stock rocketed up 106,600% to $15.50a share–in a half- hour.
The students sold their shares into the buying frenzy and eventually bagged over $350,000 in profits. NEI shares closed that day at 75 cents.

The latest market manipulation could be ripped from the pages of a Hollywood thriller, according to Peter Krauth, a highly regarded expert in metals who runs the Global Resource Alert investment service.
Only this story is not fiction… and it’s happening now, he says.

Krauth spent the last six months conducting an exhaustive investigation of a backroom deal to keep the price of silverartificially depressed. Now he’s ready to expose what’s been going on behind the scenes in the silver market and why the price is headed to $200 or more.

He reveals all the details – and how investors can profit – in a free report.